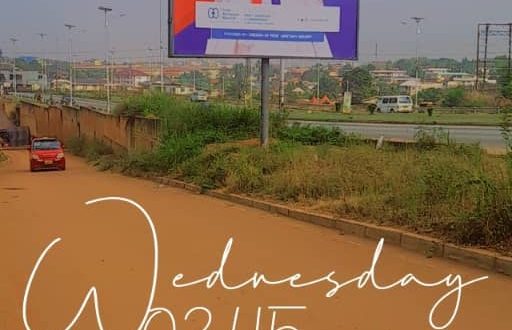 The ruling New Patriots Party would be holding their Annual National Delegates Conference in the Ashanti regional capital of Kumasi over the weekend. A composition of Presidencies, Members of Parliament, Government functional, Party executives from National to Constituency, Council of elders, etc are expected to attend this year’s program.

The National Executive Committee(NEC) issued a release banning all Billboard, Banners, Aspirant T-Shirt, etc for the program through their National Communication Director, Lawyer Buabeng Asamoah and the Ashanti Regional Minister on Tuesday, 14th December 2021 also issued a final ultimatum to all aspirants to remove their billboard by Wednesday 15th December 2021 after failing to heed to the directives of NEC.

As some law-abiding aspirants have pulled down their Billboards others including Professor Ameyaw-Kumfi’s Billboards were still seen hanging as against the directives of the party, he wants to lead. As at the time of filing this report line in Kumasi, his giant Billboards where he is appointing his fingers in the Sky were still seen but yet to be pulled down as against his campaign motto. A release from him showed his hypocritical nature because as of 3:44 today Wednesday, 15th December, 2021 his billboard at Sofoline hasn’t been removed.

All roads lead to the Ashanti regional capital of Kumasi. We would monitor to update our cherished readers.