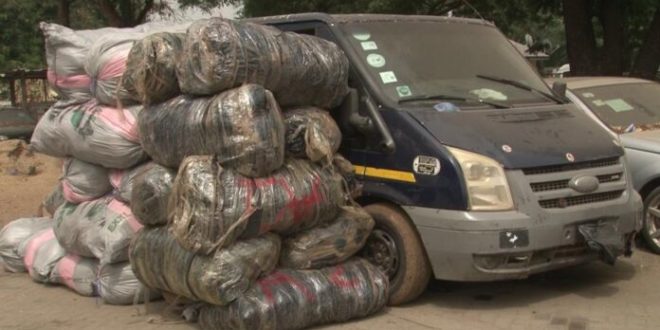 The Customs Division of the Ghana Revenue Authority (GRA) has intercepted about 119 sacks of Indian hemp at Dabala in the South Tongu District of the Volta Region of Ghana.

The 119 sacks of dried leaves, which are suspected to be Indian hemp, were concealed in bags onboard a Ford Transit van.

The driver of the vehicle was arrested while attempting to flee upon interception.

Speaking to the media, the Acting Commissioner of the Customs Division, said the sacks were intercepted upon an intelligence-led operation by the division’s Eastern Corridor Monitoring Task Force.

“The interception of the van and the arrest made led to the discovery of another consignment kept in a thatch house as the truck transporting the items broke down.”

“We are making drug trafficking unattractive and expensive to venture in. You will not succeed and the law will deal with you. I hope persons involved in the enterprise will desist and those considering to get involved will also think again,” Alhaji Iddrisu added.

Alhaji Iddrisu also mentioned that the action reflects the growing ability of customs to interrupt drug trafficking and facilitate the prosecution of the traffickers.

The suspected Indian hemp has since been handed over to the Narcotics Control Commission by the Customs Division of the GRA after a joint examination conducted in collaboration with the Bureau of National Investigation, National Security, Defence Intelligence and the Food and Drugs Authority.

I'm Adwenpa-Hene |Blogger & Broadcaster Journalist. I am the CEO and manager of this noble website. I publish on Entertainment, Sports, Politics, Lifestyle, and Technology. You can also follow Us on : YouTube Channel - My Ghana Media TV, Facebook - MyghanaMedia TV , Twitter - @MyGhanamedia2 & Instagram - My Ghana Media TV. Email Address: [email protected] Contact Us: 0200818719
@@MyGhanamedia2
Previous IMF Pushes For Debt Cancellation For Ghana And Other Distressed Countries
Next President Akufo-Addo Appoints Ken Ofori-Atta To Act As Caretaker Minister For Trade And Industry