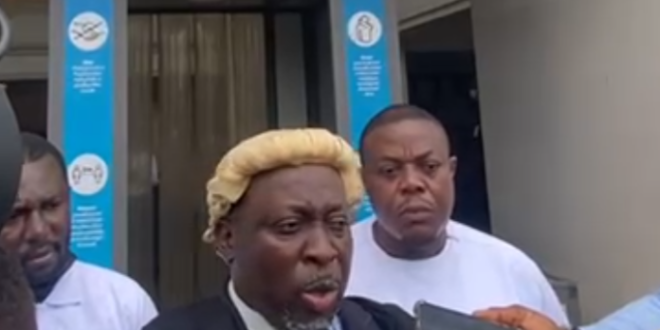 The National Democratic Congress (NDC) legal Team for the deposed Assin North Member of Parliament (MP), James Gyakye Quayson’s says they vehemently disagree with the ruling by the Supreme Court restraining Mr. Quayson from holding him as MP for the area.

Speaking to the media after the Supreme Court ruling on Wednesday, April 13, 2022, a member of the NDC legal team, Baba Jamal described the ruling as sad development for the constituents.

According to him, the ruling means the people of Assin North will be deprived of an MP for some period of time.

“The Supreme Court has given its ruling, but we vehemently disagree with their position. It is a sad day for all of us. What it means is that Assin North is also not going to have representation in Parliament for as long as this case lasts. That is a sad situation,” he stated.

Mr. Jamal further disclosed that “There are precedents in this country. We all remember the case in Ayawaso West Wuogon where the lady was allowed to be in Parliament until the final determination of the case. So we thought that the Supreme Court would consider that situation and allow the representation to continue. But our legal team will meet and officially know the next step to take.”

The Supreme Court had on March 8, 2022, ordered the legislator to file his defence in the case after in a 6-1 ruling.

The apex court had held that, the MP has been sufficiently given notice of the case against him.

The Supreme Court has by a majority decision on Wednesday, April 13, 2022 ruled that the Member of Parliament for Assin North cannot continue holding himself out as a lawmaker for the constituency.

The Apex court in a 5-2 ruling said the application from the plaintiff Michael Ankomah Nimfah succeeds.

The seven-member panel of the Supreme Court said the MP is restrained from holding himself out as an MP for the area.

EIB Network’s Court Correspondent Murtala Inusah reports that the full ruling will be ready by the close of day today Wednesday, April 13, 2022.

I'm Adwenpa-Hene |Blogger & Broadcaster Journalist. I am the CEO and manager of this noble website. I publish on Entertainment, Sports, Politics, Lifestyle, and Technology. You can also follow Us on : YouTube Channel - My Ghana Media TV, Facebook - MyghanaMedia TV , Twitter - @MyGhanamedia2 & Instagram - My Ghana Media TV. Email Address: [email protected] Contact Us: 0200818719
@@MyGhanamedia2
Previous Ghana School Of Law SRC President Reacts To Directive For Him To Step Aside Over Allegations Of Financial Impropriety
Next Northern Region: Assailants Descend On Residents Of Zacholi In Yendi, Shoot 9 Men To Death, Injure others