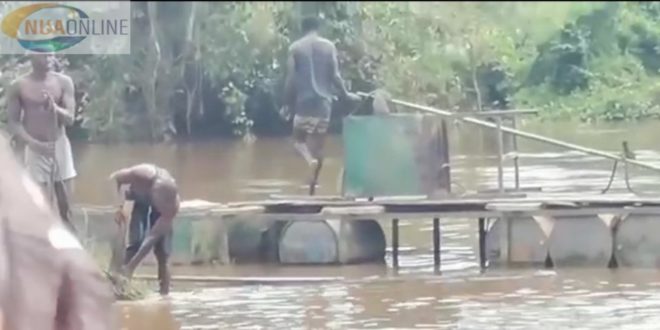 A police officer stationed at the Sehwi Wiawso Divisional command has drowned in River Sui at Awukukrom in the Suaman District of the Western North Region .

The victim, only identified as Lance Corporal Nuhu Abubakar with his colleague security personnel went to the area to stop galamseyers from operating.

According to reports, the galamseyers fled to the other side of the river upon the police arrival.

In his attempt to withdraw their equipment from the surface of the river, Nuhu unfortunately drowned.

The Assemblyman for the Electoral Area, Stephen Otoo, has been explaining to Freelancer Emmanuel Sowah, how the heard of the sad incident and the circumstances that brought the officer to the community.

“The galamseyers with the changfan have been here for a while. So the chief called me today that some police officers have come to clampdown on the illegal miners. He called me back and told me one of the officers has fallen into the river and hasn’t been found since.

“I returned from where I was to meet a huge crowd at the scene. So when he was retrived from the river, he was dead.

The police have been coming once in a while. This is the first time such an incident has happened here,” he narrated.

See also  E/R: 8 Persons Confirmed Dead, Many in Critical Condition in a Gory Accident at Kpong

The body has since been deposited at the Sehwi Wiawso Government Hospital morgue for autopsy and further investigation.