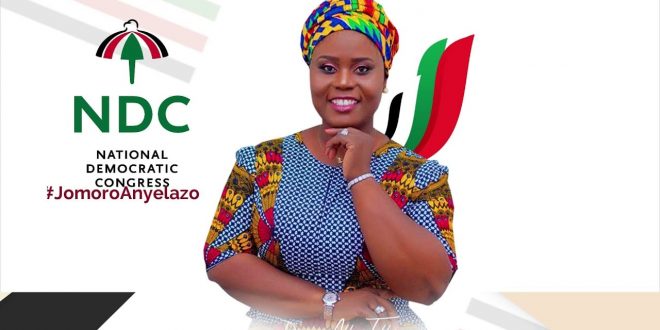 A Sekondi High Court, Commercial Division, presided over by Justice Sedina Agbemava on Monday (6 December) issued a bench warrant for the arrest of  Dorcas Toffey, the Member of Parliament (MP) for Jomoro in the Western Region.

The warrant followed her absence from the hearing of a contempt case against her on Monday morning.

The contempt case was filed against her by one Joshua Emuah Kofie from Nuba-Mpataba in the Jomoro Constituency when the MP allegedly failed to appear before the Registrar of the court to produce documents evidencing her renunciation of Ivorian citizenship as ordered by a Sekondi High Court.

Joshua Emuah Kofie averred that before the expiration of the 10 days, the respondent appealed against the ruling of the court and followed it up with a motion for stay of execution pending appeal before the Court of Appeal in Cape Coast in the Central Region.

The petitioner noted that the Court of Appeal on 26 July 2021, unanimously dismissed the MP’s motion for stay of execution pending appeal.

The affidavit stated that with the view to obtaining compliance of the High Court ruling, the Registrar of the court served hearing notices on the parties to appear before him on 23 September 2021 for production, inspection and copying of the documents, as ordered by the High Court.

It indicated that the respondent failed or refused to turn up before the Registrar as summoned and has also failed to produce the document at any other forum for any inspection and copying as ordered.

The affidavit in support added that the respondent even did not dignify the court with a letter explaining her inability or unwillingness to comply with the order as if same ought to die a natural death.

“I believe the action by the respondent is deliberately calculated by her to tell the entire world that she has absolutely no regard for the authority of the court,” the petitioner stated.

The petitioner therefore, prayed the court to commit the respondent for contempt of court to deter her and the public at large, for any such acts that undermine the authority and dignity of the court.

In her affidavit in opposition challenging the contempt against her, the Jomoro MP had indicated that the applicant had failed to demonstrate any conduct on her part that which constituted contempt of court in terms of prejudicing or impending proceedings before the court.

She said she had so much respect for the honourable court and that she would not do anything to bring the administration of justice into disrepute, public ridicule or opprobrium.

She stated that her inability to be present in court as directed by the Registrar cannot be construed as not dignifying the court.

“I was attending to parliamentary duties and out of inadvertence could not inform the Registrar of the court of my inability to be available for inspection of documents,” she stated in her affidavit in opposition.

She added that her appeal and subsequent application for stay of execution against the order of the High Court at the Court of Appeal was the intervening factor in terms of not complying with the order of the court within the 10 days period, saying “and that it is never deliberate or intentional on my part to bring the administration of justice into disrepute.”

“That as a member of the legislature which is a coordinate arm of the government, I will not do anything that will undermine or seek to undermine the judiciary,” she had added when challenging the contempt application.

She, therefore, prayed the court that the application should not be granted in the interest of justice.

The case was scheduled to be heard at the Sekondi High Court, Commercial Division Monday 6 December 2021. However, the MP who had already filed her response to the contempt, was absent and was not represented by any of her counsel.

Lead counsel for the applicant, Frank Davies, therefore, prayed the court to issue the bench warrant for the arrest of the MP because he said she was showing disrespect to the court by being absent.

Justice Sedina Agbemava subsequently issued the bench warrant for the arrest of the MP and adjourned the case to Thursday 9 December.

Meanwhile, a Sekondi High Court presided over by Justice Dr. Osei-Hwere has set 20 December 2021 to rule on an application filed by the Jomoro MP to make some amendment in her affidavit in the substantive case.

According to the applicant, the MP was not qualified to contest as the people’s representative in the country’s legislative assembly.

When the case was called on Monday, the MP was represented by one Emmanuel Venle.

Her counsel, Ebo Donkor, standing in for Edudzi Tamakloe, insisted that the court had the discretion to grant the application, but lawyer for the applicant, Bright Okyere Agyekum prayed the court not to exercise that discretion since pleadings had been closed.