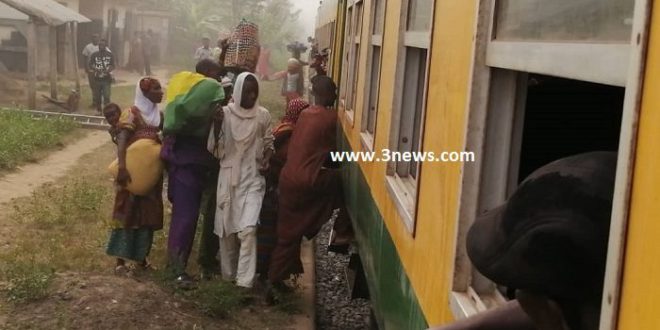 Eighteen persons are receiving treatment at two separate hospitals for minor injuries they sustained in their attempt to escape from a passenger train at the Butuah Train Station in Takoradi in the Western Region.

According to reports, the passenger train had stopped at the Butuah Train Station for routine formalities when smoke was detected billowing from the engine.

Passengers onboard the coach, close to the engine, on seeing the smoke became alarmed and started running towards the other coaches amidst shouts of “the train has caught fire”.

Other passengers who heard the wails of the fleeing passengers also became alarmed and started to panic.

Several of the passengers including students who were on-board, out of fear and desperation, all attempted to pass through the broken window at once causing a stampede.

Those who were able to pass through the broken windows were cut by the broken glasses, leaving them with injuries to their legs, arms and other parts of their body.

Public Relations Officer of the Ghana Railways Company Limited Thomas Charles Brown confirmed the incident to Connect FM and said the majority of the injured have been discharged.

“You know we run a passenger train on the Sekondi, Kojokrom to Takoradi line. It starts from Sekondi at 7am. Today when the train got to the Butuah station at about 7:38am, the engine master had as usual gone down to pick his pass to enable him proceed.

“On his way back, he detected smoke billowing from the engine. Just at that time, some passengers had also seen the smoke and without any second thoughts raised an alarm. They moved to the other coaches. By this time other passengers had heard the shouts. And because of the false alarm, they panicked and there was a stampede of a sort…”

See also  Galamsey: I Will Apply The Law Without Fear Or Favour - Abu Jinapor [Audio].

“Currently as I speak 28 of the passengers, mostly students, who were at the New Takoradi Health Center have been discharged.

“The rest, I am hopeful, will be discharged in the evening. Five of those sent to Takoradi Government Hospital have been discharged. There is this lady who is still on admission. She sustained a leg injury as she jumped from the window. She is in bandage as I speak and the nurses have assured us that she will be okay.”

Mr. Charles Brown said all medical bills will be borne by the company.

I'm Adwenpa-Hene |Blogger & Broadcaster Journalist. I am the CEO and manager of this noble website. I publish on Entertainment, Sports, Politics, Lifestyle, and Technology. You can also follow Us on : YouTube Channel - My Ghana Media TV, Facebook - MyghanaMedia TV , Twitter - @MyGhanamedia2 & Instagram - My Ghana Media TV. Email Address: [email protected] Contact Us: 0200818719
@@MyGhanamedia2
Previous Court Orders UG To Swear-In Prince Asumadu As SRC President
Next Over 2,000 Residents Of Supomu Dunkwa Flee To Near-By Beposo As Gas Tanker Collides With Truck