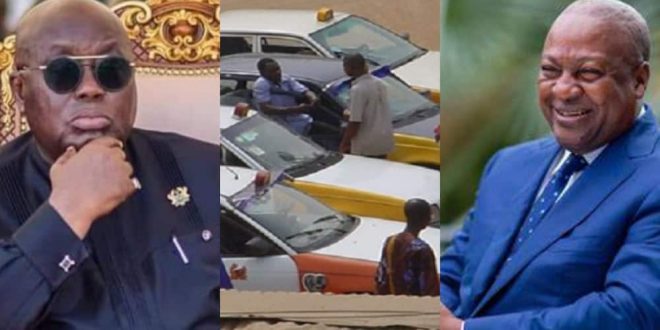 True Drivers Union, an association made up of over 1,000 drivers across the country, has rendered unqualified apologies to the former president, John Mahama, for campaigning against him.

The driver union explained that little did they know the New Patriotic Party (NPP) government would be insensitive to their plight as the complaints about the recent exorbitant hikes in fuel prices has been seemingly ignored.

Spokesperson for the Union Yaw Barima, speaking on Akoma FM‘s current affairs and political show GhanAkoma Tuesday, October 12 explained that drivers were better off during the previous government.

“We didn’t know that this current government was very insensitive to our plight. It seems fuel prices go up every month and this is affecting us.”

The aggrieved drivers say the “skyrocketing” prices of fuel may force them to increase transport fares.

They explained that “all the over thousand drivers dotted across the country in 2016 and 2020 openly campaigned for NPP because. We believed in their promises to arrest the fuel prices but it seems we have been duped, we have sold our colour TV for Black and White”.

The drivers later appealed to former president Mahama to forgive them for campaigning against him during the last two general elections.

“Mr Mahama, we are very sorry for believing in the lies of President Akufo-Addo because we didn’t know that our livelihoods would be threatened under the NPP government.”

It seems the development has triggered uneasiness among other driver union.

GPRTU, Concern Drivers Union and True Drivers Union have also threatened to increase the transport fares by 20 percent as they complain about the increasing fuel prices in recent times.