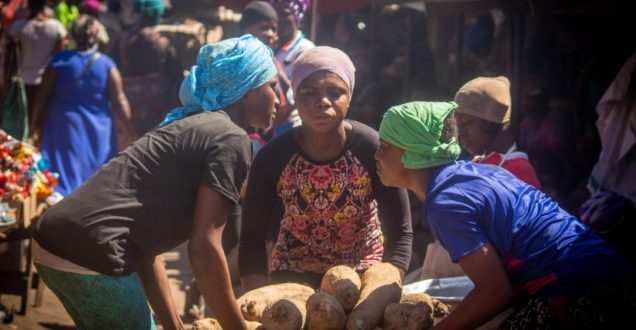 Where Is Our ‘East Legon’? – Agbogbloshie Residents Chase Bawumia To Honour Promise

The statement sent a rapturous cheer through the crowd gathered in Ghana’s biggest slum. The crowd, hyped on adrenalin and fighting for space, just to catch a glimpse of the Vice President, sang and screamed their lungs out.

When Dr Mahamudu Bawumia arrived in Agbogbloshie in September 2019, he told the milling crowd that he was the first sitting Vice President to have visited the slum.

With him on that trip, were many government top shots. The Interior Minister, the Defence Minister and Works and Housing Minister, the Minister for Sanitation were among many who turned up for that visit.

“This community centre is very important for this area. It got burnt. President Akufo-Addo says we should build a new one for you. It would be a storey building, so that you can use it for your community activities,” he said.

Dr Bawumia was the first to have gone there, but the promises he made weren’t the first to have been made there. The slum is Ghana’s largest. Old Fadama is expanding rapidly, almost bursting at its seams and a major threat to the existence of the Korle lagoon.

The community used to be a yam market and also host to a small population of Ghanaians fleeing ethnic conflict. Now, the community is a representation of nearly every ethnic group in Ghana and of course, a big base for politicians looking for votes.

Yet, the urban slum is hungry for basic infrastructure. Several other promises had been made to the people of Agbogbloshie in the past. Many have remained just that- promises- years after they were made.

Daniel Attah was one of the many people who listened to the Vice President when he visited the community. But 22 months down the line, he wonders what happened to the promises, as his mind flashes back to the momentous day.

He came from a village in the Upper West region, brimming with hope to make a living and lift himself and his family out of poverty.

He had hopes of becoming a Police officer. But that dream could not materialise so he had to adjust. Going back to Wa was not part of his plans. He slept in the open for 1-year, selling yam in traffic until he finally saved enough money to get accommodation.

For now, life is better, he can afford 50 cedis weekly rent for a small area in a wooden storey building that has no bathroom or toilet. So, he has to pay to use public bathrooms.

Daniel recollects that the Vice President made a promise to build toilets for the community. Dr Bawumia stated, “In all, we are going to build 4 different 8- unit toilets for this community”.

The statement remains a promise yet to be fulfilled.

Daniel wants political leaders to be sensitive to their needs. “There is no school here, there is no hospital here,  the government must give us basic needs. In the last 4 years, they only tarred the road in front of the community,” he added.

“Even if we complain and tell them our problems, they (politicians) will not do anything about it”. A quote from Ramatu Adam, also a resident of Old Fadama who travelled from Saltpond to Accra to hustle and eke out a living.

She used to be a squatter at Cantonments but was evicted and her kiosk demolished.

“We were given 200 cedis when we were evicted from Cantonments but it was not enough to rent a decent place. So, I slept in the Agbogbloshie market with my 1-week-old grandchild. It was very cold at night so someone recommended this community,” she added.

In a tiny space built as a shop, Ramatu pays 30 cedis weekly, so she can have a place to lay her head. She shares the space with her daughter and granddaughter. But lately, she has invited one other lady who also has a daughter to share her room so that they can split the cost of the rent.

“5 of us sleep in this small space and the room has no windows. It becomes hot and we all have skin rashes”. She complained.

Ramatu witnessed the big funfair and heard the promises made by the Vice President when he visited the community. She was hopeful that indeed, her community would receive basic services.

“We are suffering here. I am suffering…. When you vote for politicians, they enjoy while we suffer”, she said in disappointment.

Ramatu says she is working hard to make enough money and then relocate to Mankessim in the Central region to start a new trade. But unfortunately, she has not made enough money yet so, she continues her daily grind.

“Don’t ask me what I want politicians to do for us. They know what to do but they won’t do it,” she concluded.

Agbogbloshie, one of Ghana’s largest food markets, is a bustling space. The brisk trading that happens here, has attracted thousands of mainly young people from northern Ghana. A lot of them carry foodstuff and other heavy loads from the market to lorry parks and into people’s homes.

Valentina Roberts, 14 years, is one of them. She left her native Tumu about 4 years ago, following in the steps of her senior sister who had earlier been here too as a head porter.

“My father had many wives and many children. So feeding was even a problem. I had to leave school and when I did, I followed my sister here,” she says.

Many of the girls in Agbogbloshie share Valentina’s story.

When Dr. Bawumia came to Agbogbloshie on that day, she was part of the thousands who poured out onto the streets in pomp and pageantry.

“On that day, I was very happy. Some of my friends told me that when the 2016 elections were over, similar things happened here. I was hoping that when the Vice President came here and spoke to us, things would change here,” she said.

Today, over two years on from that day, none of the promises made by the Vice President have been honoured. The community centre, where Mr Bawumia made those promises, hasn’t seen any infrastructure. He had promised that the government was going to rebuild a community centre that had been razed by fire.

Currently, at the centre, brisk business is happening. The whole place is covered by yam, yam traders and petty traders are hard at work. There’s no sign of any work here.

“They haven’t done it. I am the Assemblyman here and so even if there were discussions to do it, I would be in the know,” says Musah Ziyad, Assembly Man for the area.

Beyond what Mr Bawumia promised during his September 2019 visit to Agbogbloshie, the government pledged to build a ten thousand capacity hostel where Kayayei can sleep. Indeed, this was a promise made prior to the 2016 election, which the ruling New Patriotic Party won.

“He did not honour that promise he made. If you make a promise to people based on which people vote for you, I think you should honour your promise,” says Musah Ziyad.

He said, “Mr Speaker, I am happy to announce that preparations are now complete and the construction of the first 600-bed Kayayei hostel will commence in Agbogbloshie next month to provide accommodation and skills training to these vulnerable young women”.

At the vetting of the Ken Ofori Atta for finance minister in March 2021, the Member of Parliament for Madina Francis Xavier Sosu asked about the progress of the kayayei hostel project. Mr Ofori Atta answered, “Let me get back to you on this… as to how we intend to do that”.

Then subsequently he added “the issue of the welfare status of kayayei is important to us but the challenge really as I see it with regards to our investment in the north, such as irrigation and agriculture etc. It is truly to reverse this trend. I don’t think is sustainable to be encouraging that. there are too many human rights abuses…”

JoyNews reached out to the Vice President’s office to ask them about the promise and why it hadn’t been kept. Dr Gideon Boako, Spokesperson for Dr Bawumia said even though the promise was made by Dr Bawumia, it was the Accra Metropolitan Assembly (AMA) that is supposed to put up the structures. He directed that we speak with the AMA instead.

The Accra Mayor, Mohammed Nii Adjei Sowah in an interview with JoyNews said Vice President’s promise to the people, forms part of a bigger plan to upgrade the slum of Old Fadama. He pointed out that the implementation of the project was delayed because of coronavirus infections.

“Unfortunately, we were struck by COVID 19 in 2020. 2020 was a year that no action was taken. We were in lockdown and there were many activities that we could not do. 2021 is a year of action,” Mr Sowah said.

He added all architectural design and bill of quantities for the slum upgrade project has been submitted for finalization.

“Costing for the hostel facilities and the burnt Old Fadama community centre project has also been completed”, he said. But the Accra Mayor refused to give a timeline on when the project will start and finish. He simply said, “in the coming months we will be on-site”.

Even though all those promises are yet to happen, the government now seem to be planning to go down even harder on the slum dwellers. The Greater Accra Regional Minister, Henry Quartey, may now move the slum dwellers entirely.

This sharply contrasts, what the Vice President in 2019, told the people. “We did not just come here to look at your problems and then leave. We are not going to sack you but rather provide you services”, he promised.

The corners of the slum echo sentiments that government must do more. The stench of poverty and deprivation here is as intense as the spontaneous cheers and promises of politicians evoked four years. Not much has changed.