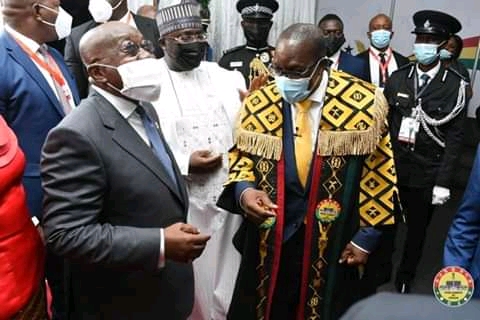 Speaker of Parliament, Alban Bagbin, has warned the governing New Patriotic Party (NPP) that they are likely to lose the 2024 general elections if the E-levy is approved.

“As you go around the country to convince Ghanaians to vote for your party and you, others with big pockets are facilitating parties and when you win power, they get the positions, not you.

“We always vote ourselves out of power, which my colleagues in the NPP are doing now. So don’t be surprised in the next elections if you don’t win.

“It is very clear if this your E-levy goes through you have lost the elections,” he said while addressing a forum of former Parliamentarians held at his behest on Thursday, December 23.

His comments come at a time the Majority Leader Osei Kyei-Mensah-Bonsu had blamed him for the recent happening in Parliament.

Mr Kyei-Mensah-Bonsu revealed that the Speaker had warned the Minister of Finance, Ken Ofori-Atta, that without allocating about 2% of the country’s total revenue to Parliament, “his budget is going to be thrown out”.

Addressing journalists in Accra on Thursday, December 23, the longest-serving Member of Parliament said he met the top hierarchy of the clergy over Monday’s melee in Parliament and it is high time he made the truth known.

“Distinguished colleagues, I told you that some clergy men, the cream of Christendom in the country have met me [and] I am not going to speak for a long time but the people of this country should know what is leading all of us into this crisis.

“GH¢1.72 billion for what? He says that he has information that the total revenue of this country was going to be GH¢89 billion and that the Finance Minister should give him 2 percent of it and that works to GH¢1.72 billion.

“If he doesn’t give Parliament GH¢1.72 billion, then his budget is going to be thrown out. He was going to make sure the budget is rejected.”

In the absence of the Speaker last Monday, a free-for-all fight broke out between Minority and Majority members with the bill on the Electronic Transfer Levy not discussed.

“I am hoping that this period that we have between now and the 18th of January, we will be able to get to the bottom of this and rally behind as one people with a common destiny and not submit to the whims and caprices of just one individual.”

I'm Adwenpa-Hene |Blogger & Broadcaster Journalist. I am the CEO and manager of this noble website. I publish on Entertainment, Sports, Politics, Lifestyle, and Technology. You can also follow Us on : YouTube Channel - My Ghana Media TV, Facebook - MyghanaMedia TV , Twitter - @MyGhanamedia2 & Instagram - My Ghana Media TV. Email Address: [email protected] Contact Us: 0200818719
@@MyGhanamedia2
Previous NDC MP Cassiel Ato Forson, Two Others Charged With Causing Financial Loss To The State
Next MP For Ajumako-Enyan-Esiam, Ato Forson Reacts To Criminal Charges Against Him; I Shall Not Be Distracted