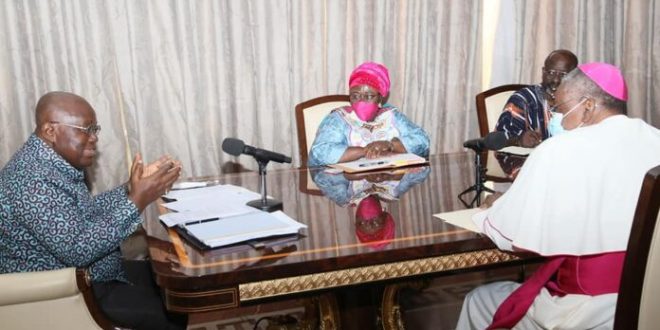 The Director of Communications for the governing New Patriotic Party, Yaw Buaben Asamoa, has criticised the Catholic Bishops Conference for a lack of clarity in its concerns about the Akufo-Addo administration’s handling of the public purse.

The Catholic Bishops Conference, at a plenary assembly of the association in Wa on Monday, suggested that the government had lost touch with Ghanaians and had reneged on its promise of protecting the public purse.

It also questioned what it said was a lack of empathy from the government towards Ghanaians.

In an interview with Accra-based Citi Fm however, Mr. Asamoa said the conference would have done better by making more targeted remarks about the NPP’s governance.

“Where are the specifics on that? Some level of clarity at that level is important. It is not about enabling the NDC to come in and spout,” he said.

Mr. Asamoa felt it was unfair to link economic difficulties with the protection of the public purse.

In his view, the Akufo-Addo administration is “widening the social net, and we believe we are sending the economy in the right direction.”

Like the government has done, he attributed struggles to the almost two-year-old coronavirus pandemic.

“The impact of COVID-19 that we are still riding has affected cost of living and prices, and many people worldwide have lost their jobs.”

But amid all these, Mr. Asamoa said the government showed “compassion at its highest” with its social interventions to cushion Ghanaians.

Meanwhile, the National Democratic Congress believes the criticism from the Catholic Bishops Conference was further evidence of Akufo-Addo’s

“For us in the NDC, this corroborates what we have been saying all along”, noted the Communication’s Officer for the NDC, Sammy Gyamfi.

“We are happy that neutral respected voices like the Catholic Bishops Conference are now coming out to speak up about some of these issues,” he added.

I'm Adwenpa-Hene |Blogger & Broadcaster Journalist. I am the CEO and manager of this noble website. I publish on Entertainment, Sports, Politics, Lifestyle, and Technology. You can also follow Us on : YouTube Channel - My Ghana Media TV, Facebook - MyghanaMedia TV , Twitter - @MyGhanamedia2 & Instagram - My Ghana Media TV. Email Address: [email protected] Contact Us: 0200818719
@@MyGhanamedia2
Previous Mahama To EC: I Don’t Hate You, I Want You To Be Better, No. 1 in Africa
Next NPP Is Anti-Northerner, They Won’t Allow Bawumia To Be President – John Mahama