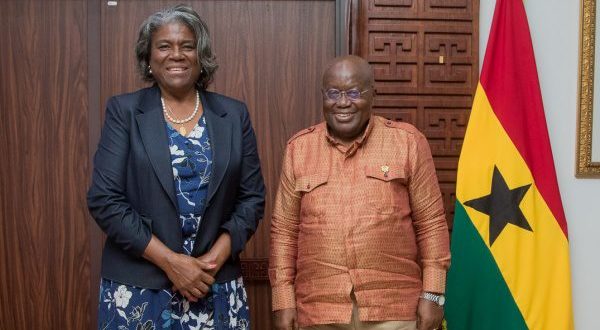 The United States’ Ambassador to the United Nations, Linda Thomas-Greenfield, has lauded Ghana’s President, Nana Addo Dankwa Akufo-Addo, for his exemplary contribution to the peace and security in the West African Region, as well as Ghana’s role on the UN Security Council.

She also praised Ghana’s solid relationship with the United States over the years, stating that “Ghana has been a stalwart and steadfast partner to the United States, and we are very much appreciated the opportunity to work with you.”

She also expressed the support of the US to President Akufo-Addo in tackling security related issues in West Africa as Chairman of ECOWAS.

“We also want to express to you our strong support for your efforts in dealing with the situation here in the region as President of ECOWAS, the very tough, sometimes decisions that you have had to make to deal with situations in the region, particularly as it relates to Mali”

On the Russian invasion of Ukraine, Linda Thomas-Greenfield had this to say.

“Mr President, on Ukraine, as you know and you’ve heard, the President, as well as the Secretary of State and myself are deeply concerned by the growing crisis caused by the war in Ukraine. We believe it’s a war of choice that was made by (President) Putin, his disproportionate actions in terms of attacks on civilian infrastructure and this war has had a very significant impact on the continent of Africa, including Ghana,” she said

Touching on the food crisis on the continent in general and Ghana in particular, the US envoy said that “I had an opportunity to talk with farmers in Tamale today, and hear from them some of the challenges they’re facing in the agricultural sector. They are not able to access fertilizer and, of course, the high price of petrol has had a huge impact on them, and they are planting about 40% of what they planted in the past. We have responded to this crisis throughout the continent of Africa. We have had to continue to work with you to address the rising food insecurity challenge”

See also  #SONA22: I Have Built More Roads In 5 Years Than Any Government In Ghana's History – Akufo-Addo

She also dismissed the narrative being pushed by Russia that the food crisis across the world is as a result of sanctions the US has placed on the European giant.

“I would like to state, Mr. President, that the narrative that the Russians have used in dealing with the situation and suggests that sanctions the US has on Russia is the cause of food insecurity crisis and that could be far from the truth. We have no sanctions on Russian agricultural products, no sanctions on fertilizers, no sanctions on their wheat, and we have indicated that we are prepared to work with them and we support the Secretary General’s efforts to finding a way to get Ukrainian wheat and Ukrainian fertilizer and Russia fertilizer to the market initiative, that’s the Secretary General-led”

She also expressed concerns about the security situations in Mali and the refusal by authorities in the country not to adhere to initiatives aimed at bringing lasting peace into the country.

Linda Thomas-Greenfield said that the US welcomes any advice President Akufo-Addo might give them in order to deal decisively with the Malian crisis.

I'm Adwenpa-Hene |Blogger & Broadcaster Journalist. I am the CEO and manager of this noble website. I publish on Entertainment, Sports, Politics, Lifestyle, and Technology. You can also follow Us on : YouTube Channel - My Ghana Media TV, Facebook - MyghanaMedia TV , Twitter - @MyGhanamedia2 & Instagram - My Ghana Media TV. Email Address: [email protected] Contact Us: 0200818719
@@MyGhanamedia2
Previous GUTA: Our Members Are Calling For A Demonstration Against Gov’t
Next Ghana: Today’s Newspapers Headlines; Monday August 8, 2022