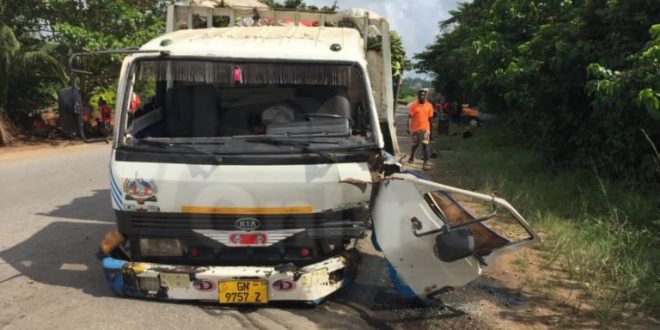 A taxi driver has been confirmed dead in an accident on the Abura Dunkwa-Nyankomasi road in the Central Region.

The accident involved a Toyota Corolla taxi with the registration AC 370-15 and Kia Rhino with registration GN 9757-Z.

According to reports, the Kia Rhino vehicle was loaded with combs of plantain travelling from Abura Dunkwa to Accra while the Taxi approached from the opposite direction.

One of the survivors, Kwame, explained that the truck driver made a wrongful overtaking and collided with the oncoming Taxi leading to the driver’s death.

Per his account, the accident occurred immediately after a police barrier at Tekyi.

He said the deceased taxi driver, whose name was given as Coleman, died instantly.

Kwame was part of the five persons in the Taxi, including the deceased driver and is responding to treatment.