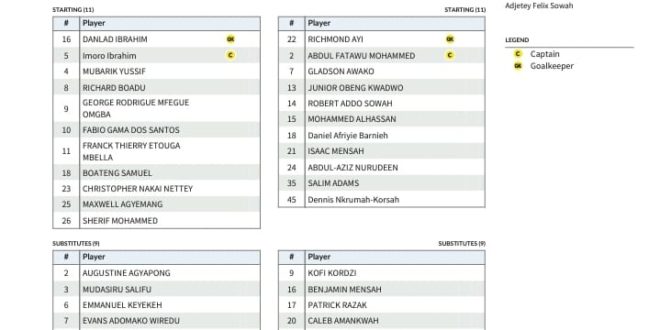 The standout Ghana Premier League fixture this weekend takes place at the Baba Yara Stadium in Kumasi on Sunday afternoon, as Asante Kotoko face Hearts of Oak in the Super Clash.

Five places and 13 points separate the two bitter rivals in the table, with the hosts seeking to steer clear of second-placed Bechem United at the top while the reigning champions aim to re-ignite their title pursuit.

Kotoko are unbeaten in seven games in the top flight and won their most recent match, a 1-0 victory over local rivals King Faisal.

The Porcupine Warriors haven’t lost since February 7, 2022, when they were shocked by the bottom-placed Elmina Sharks.

This season, Kotoko have won more points and scored more goals than any other team. They have 35 goals, 14 more than their opponents on Sunday.

Their two main strikers, Cameroonians Mbella Etouga and Mfegue Omgba, have been outstanding, scoring a combined 25 goals – the same number as the entire Hearts of Oak team.

Fabio Gama has recovered from injury and was in the thick of things in last Sunday’s victory. The Brazilian will almost certainly be handed an important role by coach Dr Prosper Ogum against the Phobians.

While Kotoko is cruising to their 25th league title, Hearts, who won the league last season, are desperately trying to finish in the top four.

They boosted their hopes with a hard-fought 1-0 win over Medeama last weekend in Accra, and they hope to beat Kotoko to achieve back-to-back victories for the second time this season.

Hearts are paying the price for a shaky start. They are 13 points behind Kotoko and know that only a miracle can see them overtake Kotoko and clinch the title for the 22nd time after ending their decade-long wait last season.

During the week, the Phobians announced the signing of former Asante Kotoko defender Samuel Inkoom, with reports claiming the former Ghana international could make his debut on Sunday.

Meanwhile, their experienced midfielder Sulley Muntari is out after missing all of the training this week for unknown reasons.

This is their third meeting of the season. Surprisingly, the high-flying Kotoko failed to beat Hearts in the previous two. The first meeting ended 0-0 before Patrick Razak inspired the Phobians to a 2-1 victory in the President’s Cup.

As a result, despite not performing as well as the league table suggests, Hearts should not be underestimated and will be confident of taking three points.

Kotoko supporters, on the other hand, believe Sunday will be their day, with their team putting on a dominant performance to defeat Hearts.

Hearts of Oak and Kotoko have met 27 times in the Ghana Premier League since 2006, with Hearts of Oak winning 10 and Kotoko winning seven. During that time, 10 draws were recorded.

The Phobians have only lost one of their last 13 away games against Kotoko, winning six.

Accra Hearts of Oak play arch rivals Kumasi Asante Kotoko in the first of the specially arranged Super-2 clashes at the Baba Yara Stadium in Kumasi.The match start at 3pm. Samuel Boadu and Prosper Ogum have both released their starting XI for the game.

Below is the confirmed starting line-ups of both teams: