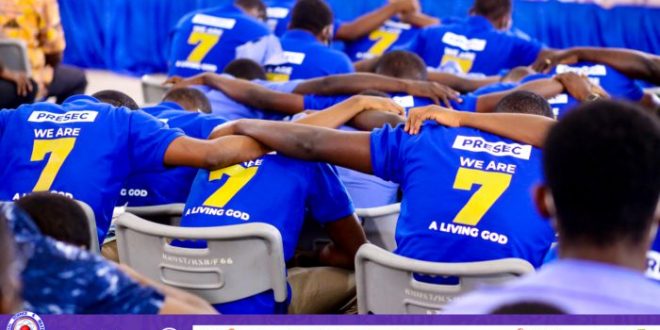 2021 NSMQ: Presec Alumni To Petition Primetime Over “Raw Deal” During The Competition’s Finals

The old students of Presbyterian Boys’ Secondary School (Presec Legon) have revealed that they will petition organisers of National Science and Maths Quiz (NSMQ), Primetime, over what they say is a “raw deal” during the competition’s finals.

In a statement on Wednesday, the Global President of the Ɔdadeɛ Alumni and Mentorship Centre, Dr Ernest Ofori Sarpong, said an investigation ought to be conducted to ascertain incidents that led to Presec being “given a raw deal”.

According to him, this decision was unanimously reached during a meeting on Tuesday between Presec Legon, alumni of the school, and the handlers of NSMQ.

The 2021 NSMQ final was held on Friday, November 26, at the Kwame Nkrumah University of Science and Technology (KNUST) in Kumasi and was won by Prempeh College.

Right from the beginning, the race saw a keen and stiff competition by all the three schools as they locked horns neck to neck for a lead. 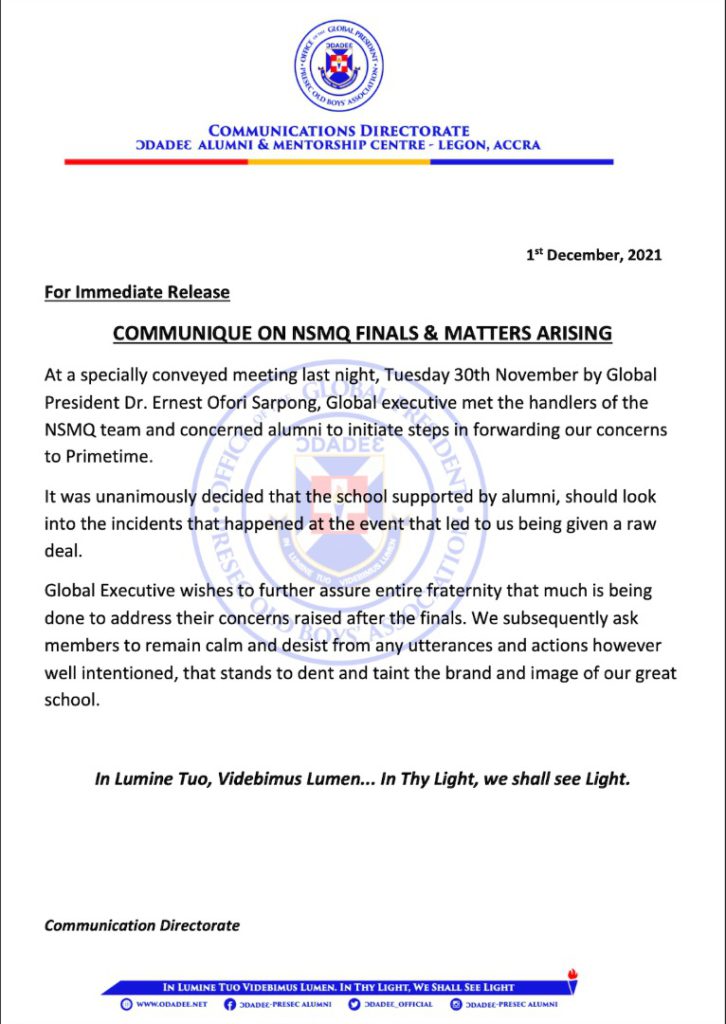 The ‘Amanfuor’, nonetheless, emerged victorious after attaining a four-point lead, the ‘Ɔdadeɛs’.

However, some Presec Legon alumni believe that the quiz was tipped in favour of the 2021 victors.

As such, the Global Executive further assured the old students that “much is being done to address their concerns raised after the finals.”

Dr Sarpong subsequently asked the fraternity to remain calm and desist from utterances and actions that “stands to dent and taint the brand and image of our great school.”

I'm Adwenpa-Hene |Blogger & Broadcaster Journalist. I am the CEO and manager of this noble website. I publish on Entertainment, Sports, Politics, Lifestyle, and Technology. You can also follow Us on : YouTube Channel - My Ghana Media TV, Facebook - MyghanaMedia TV , Twitter - @MyGhanamedia2 & Instagram - My Ghana Media TV. Email Address: [email protected] Contact Us: 0200818719
@@MyGhanamedia2
Previous Covid-19 Vaccination Made Mandatory For Commercial Drivers, Okada riders, staffs of schools, others
Next Video: Chaos Erupts In Parliament As Minority Members Whisks Away Speaker’s Seat