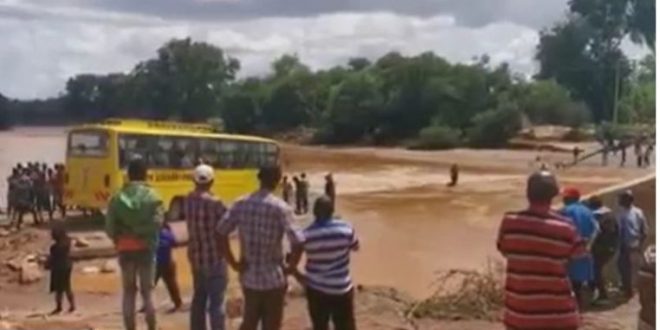 At least 23 people have drowned after a bus travelling to a wedding plunged into a flooded river in Kenya.

Video footage shows the bus was swept away after the driver tried to cross fast-flowing water over a bridge in the Enziu River, about 200km (125 miles) east of the Kenyan capital, Nairobi.

The bus had been hired to transport church choir members.

Four of the dead were children and a least 12 people have been rescued, local reports say.

See also  Dr Adutwum Is A Generational Thinker; Ghanaians Should Be Proud Of Him – Samson Lardy Anyenini

However, it is unclear how many people were in the bus at the time.

The driver was not familiar with the route and the bridge over the river in Mwingi, Kitui county, local news site the Standard reports.

She added that 23 bodies had been recovered but added that more were still stuck in the bus and that recovery operations would continue on Sunday.

See also  'If You Come Back 20 Times, I'll Move You 30 Times' – Henry Quartey To Squatters

Unusual heavy rains have been falling in many parts of Kenya recently, including in some drought-hit regions where domestic and wild animals have died because of lack of pasture.