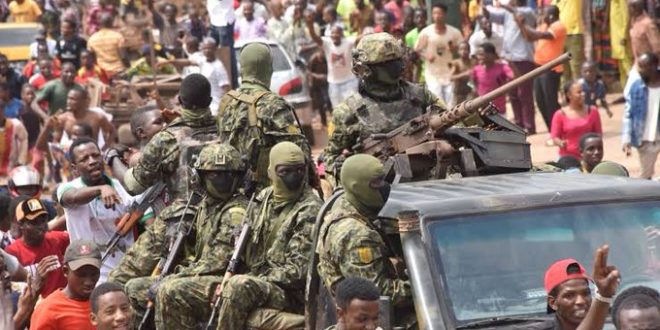 Video: Coup Attempt In Guinea-Bissau As Heavy Gunfire Heard Around The Government Palace

Heavy gunfire was heard in the capital of Guinea-Bissau on Tuesday, 1st February 2022 near a compound where President Umaro Sissoco Embalo was presiding over a cabinet meeting, with early reports indicating possible casualties, a Reuters witness and sources said.

It was not immediately clear who was firing the gunshots.

A security source with contacts inside the compound, the Government Palace, said an unknown number of people had been hit by the gunfire. A second source said two people were dead, but it was unclear who they were.

Sissoco Embalo held an extraordinary cabinet meeting at around 10 a.m., entering the building with a heavy security detail, a diplomatic source said.

Normally busy streets around the palace were deserted on Tuesday afternoon, a civil society activist said. An unverified video shared on social media appeared to show a man standing outside the compound firing a rocket-propelled grenade.

Members of government consulted by Reuters to confirm the events did not answer their telephones.

West Africa has seen a rash of coups in the last 18 months. Emboldened by popular discontent, militaries in Mali, Guinea and Burkina Faso have seized power, reversing democratic gains that had seen the region shed its tag as Africa’s “coup belt”.

Political instability has blighted Guinea-Bissau for decades. Nine coups or attempted coups since independence from Portugal in 1974 have hobbled efforts to pull the economy beyond its reliance on the export of cashew nuts.

Possible military coup feared in Guinea-Bissau. Would be the 4th in West Africa in the last 18 months after Mali, Guinea & Burkina Faso. Guinea has had 9 coups/ attempted coups since independence in 1974. Many African leaders can’t afford to close their eyes now. pic.twitter.com/vla4VRyUqL

Ecowas, the regional bloc promoting political and economic cooperation in West Africa, has condemned what it calls an “attempted coup” in Guinea-Bissau and is urging the military to return to its barracks.

It follows reports of men in civilian clothing opening fire close to a government building hosting a meeting between the president and prime minister of Guinea-Bissau, whose whereabouts remain unknown.

“Ecowas is following with great concern the evolution of the situation in Guinea-Bissau… where military gunfire is taking place around the government palace,” Reuters quotes the statement as saying.

“Ecowas condemns this attempted coup and holds the military responsible for the safety of President Umaro Sissoco Embaló and members of his government.”

In recent days Ecowas suspended another of its members, Burkina Faso, where the military mounted a putsch.

A few days ago, Rwandan President Paul Kagame said a lot of the coups happening recently in Africa can be put down to bad leadership.

With regard to Rwanda, however, Mr. Kagame said he does not see any blemish on his part for which a coup could be staged against him and his government by either the military or citizenry.

Mr Kagame said this in an answer to the following question: “Do you think a coup d’état is impossible in Rwanda?” while he spoke to the Africa Report on the next EU-AU summit, coups in Africa, security concerns in DRC and the thaw with Uganda and Israel in the AU as well as the presence of the Wagner group in Mali, access to vaccines among a raft of other issues.

The 64-year-old Rwandan leader, who has been in power for nearly 22 years, answered several questions by videoconference from Kigali, two weeks before the summit between the European Union and the African Union (17 and 18 February in Brussels), a summit which he has worked to prepare alongside presidents Emmanuel Macron and Macky Sall of France and Senegal, respectively, and former Belgian Prime Minister Charles Michel, who is the President of the European Council.

Responding directly to the possibility of him being toppled in a coup, Mr Kagame said: “I don’t know, but let me put it another way: first of all, it is up to the Rwandans themselves to say what they think, knowing where we started from, what we did and what we are doing”.

Secondly, he pointed out, “I don’t see anything that could lead either the military or the civilians to a level of discontent and dissatisfaction that could lead to a coup”.

“Our system of governance is, in my view, designed to meet the needs of the citizens”, Mr Kagame asserted, adding: “I don’t see any blame on myself or the institutions that would lead to such a situation”.

Speaking about the military coups that happened in Mali, Guinea, and Sudan in 2021, Mr Kagame said: “With regard to the three coups, I think that this type of event occurs above all because there are problems in these countries that have not been resolved for several years”.  In his view, “this is the case of Sudan: there were problems under Omar al-Bashir, and they have remained since the transition”.

“This kind of situation is bound to recur, regardless of the position of the African Union, because the organisation is not meant to manage countries individually, let alone to solve long-standing problems”.

Defending the AU’s posture on the coups, Mr. Kagame said: “Of course, the AU and the international community can provide support” but pointed out that “sometimes, the countries concerned find their own solutions, and then foreign powers try to dictate their own”.

“The African Union’s insufficient capacity to manage these situations remains a weakness, however”, he admitted.

Asked: “How do you perceive the return of the military to the political scene? Is it a democratic regression?” Mr Kagame responded: “It is, to some extent, the result of a failure of governance. It is not just the fault of the military, civilians also have a responsibility. Of course, it is not the role of the military to carry out this kind of action, but it cannot be ignored that in some cases civilians also commit questionable acts”.

“If under a civilian government the situation deteriorates and people die, problems pile up and the authorities use the military to rig elections, who is to blame when the military overthrows these governments? I find it inappropriate to criticise only the military and not blame the civilians who used them to stay in power. I guess it is from this kind of analysis that some people say that there are good and bad coups”, he analysed.

Then, he added: “Even if the army finds justifications for its action and the civilians are initially satisfied with it, the question remains: are the military really working to put in place a transition to solve the problems that led them to make their coup? This is the situation we will be following closely in Guinea and Mali”.

Answering a question about whether he thinks about his country’s next presidential election in 2024, Mr Kagame said: “I have to. Whether I get involved in it or not, it is part of my job. I must not only think about today, but also about tomorrow. I want Rwandans to be able to make their choice in 2024 and decide in peace”. Asked: “Will you be a candidate?” he responded: “Maybe, I don’t know yet. The Constitution allows me to do so”. Addressing criticisms from his “detractors” who accuse him of being an “icy” and “intractable” president who wields “vertical power without checks and balances”, Mr Kagame said: “As with any of us, there is, on the one hand, what I am that I cannot change, and, on the other hand, a whole part of myself that I can work on. I can’t change the genetics. Maybe that’s why I’m seen as a cold person, I don’t know. But I’m always willing to work on the rest”.

He said: “When I was young, I was extremely impatient. Over the years, I’ve learned that you have to take your time if you want to achieve your goals. I have learned to slow down, to do what is feasible at the right time and to delay when necessary”.

“Do you know of a country where presidents, ministers and business leaders have no detractors? If so, please tell me. I can’t wait to visit it! I know that these criticisms exist and that I am the object of them. But I also know that I am far from being the only one in this case”. 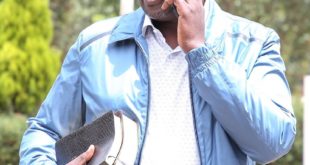 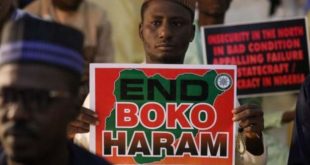 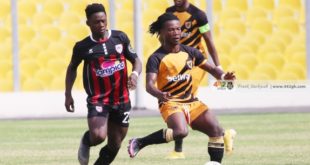 Spread the love Global footballers welfare body, FIFPro, has appealed the decision of the Ghana …