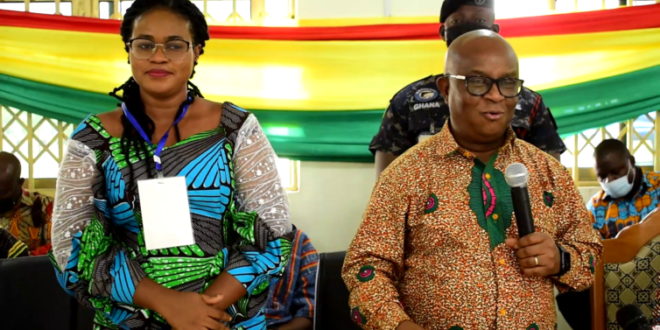 The Adaklu District Assembly in the Volta Region has rejected a nominee for the position of District Chief Executive for the fifth consecutive time.

Juliana Kpedekpo who was the third nominee for the position polled 9 ‘Yes’ votes, against 10 ‘No’ votes when she was presented to the assembly for confirmation on Wednesday.

Before the voting process to confirm or reject the nominee, the appointments of 6 government appointees were revoked and new faces were sworn in.

The Volta Regional Minister, Dr. Archibald Letsa who has been acting as DCE for Adaklu, appealed to the Assembly Members to confirm the nominee to reduce his workload.

He complained that his desk has been filled with documents from the district for which he has to sacrifice his weekends to work on, just to ensure an effective administration of the District Assembly.

“I will be very happy if you have your own DCE here with you so that documents will not be brought to me in Ho anymore, so that I can hand over to her and also concentrate on my job”

“I am appealing because the choice is yours, nobody can coerce you but we are only pleading and appealing to you to approve the nominee for us today”, he said.

Dr. Lesta’s plea, however, fell on deaf ears when 10 of the Assembly Members voted against the nominee, while 9 voted in her favour.

This is the 5th time the Adaklu District Assembly is rejecting the President’s DCE nominee in the second term of the New Patriotic Party (NPP).

The immediate past DCE, Phanuel Kadey and Bright Nyatsikor were rejected by the Assembly Members on two occasions each.

But the Adaklu District Assembly Presiding Member, Winfred Agbogbo believes the story might change if a wider consultation is done before the next nominee is selected.

He emphasized that the Assembly Members are only acting on the wishes of the residents who do not want the 3 DCE nominees to head the Assembly based on reasons best known to them.

“No Assembly Member is against development, no Assembly Member will be against the government. We know the essential responsibility of the political head of every district, more so, the District Chief Executive.”

“So we are making this appeal through this medium to the Presidency through the Regional Minister, that it is our wish that before any other nominee will be appointed, this broader consultation should be done”, he stressed.

He clarified that the Assembly Members are not “making business” out of the confirmation process but are most concerned about the development of the District and want a unifier to lead.

Meanwhile, the Akatsi North District Assembly finally approved the President’s nominee for the position of DCE after several attempts.

Ofosu Simon Peter, who was the third nominee for the position polled 13 ‘Yes’ votes against 4 ‘No’ votes on Wednesday when he was presented to the Assembly. There was 1 rejected ballot.

This follows the rejection of two nominees as DCE on six occasions.

Prosper Patu Kofi who was the first to be nominated, was rejected on two occasions, while Paul Agbesi Ayrah the second nominee, failed to garner the required proportion of votes to sail through in four attempts.