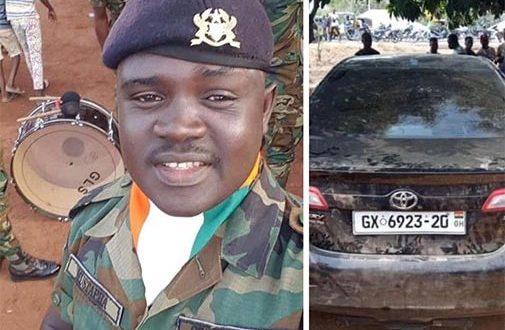 Convict Soldier, 3 Others In Court for Another Car Snatching Case

Mohammed Mustapha Yussif, who was sentenced to fifteen years in prison with three others has been arranged before the Tamale Circuit Court in connection with another alleged car snatching incident in Tamale in the Northern region.

The accused person has been accused of stealing a Toyota Camry Spider with registration number GX6923-20, iPhone, and other properties on August 20, 2021, from one Muniru Abdul Waris at Gbayamli, a suburb of Tamale.

They have been charged with conspiracy to rob, robbery, possession of firearms and ammunition without lawful authority, and possession of police and military accoutrements. However, they have pleaded not guilty to all charges.

Meanwhile, the police have launched a manhunt for four other accomplices in the case who are currently at large.

It will be recalled that the Tamale Circuit Court presided by His Honor Alexandra Oworae, sentenced five accused persons to 15 years each in prison for snatching a Toyota Camry car at Banvum, a suburb of Tamale in the Northern region.

This was after they pleaded guilty to conspiracy to rob, robbery, possession of firearms and ammunition without lawful authority, and possession of police and military accoutrements charges leveled against them.