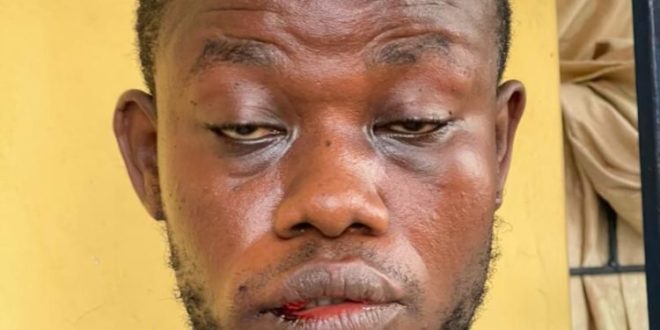 Video: Journalist Beaten By Security Personnel At Takoradi For Allegedly Photographing Them

Five days after Eric Nana Gyetuah, a journalist with Takoradi-based Connect FM was allegedly beaten by unknown security personnel in plain clothes, for allegedly photographing them, the Public Affairs Directorate of the Western Regional Police Command says it is yet to be briefed on the matter.

Nana Gyetuah was attacked last Thursday and beaten by the suspected plain-clothes security personnel who had brought some suspects in handcuffs to eat at the God is Love Chop Bar.

Nana Gyetuah was sent to the Western Regional Police Command and was later identified as a journalist.

The Public Affairs Head of the Western Regional Police Command, DSP Olivia Adiku, told Citi News she is aware Nana Gyetuah has been released, but she’s yet to be briefed on the matter and the state of the investigation.

”I have no information on the case now, so I can’t speak on it. The incident clashed with the Sekondi-Takoradi Mayor’s issue. Yes, I was aware of it, but I do not know the status of the case.”