Breaking News
Home / GENERAL NEWS / Dan Botwe To MMDCEs: ‘You Will Face Sanctions When You Misbehave’ 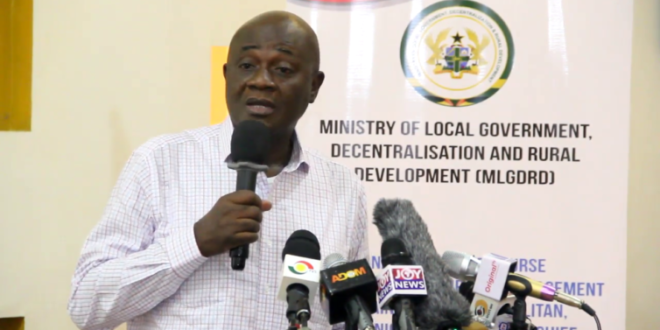 Dan Botwe To MMDCEs: ‘You Will Face Sanctions When You Misbehave’

The Minister for Local Government, Decentralization and Rural Development, Dan Kwaku Botwe, says government will not hesitate to punish any local government official whose action or inaction brings the name of the government into disrepute.

The sector Minister indicated that government will ensure that District or Metropolitan Chief Executives live up to expectation.

Speaking to Citi News following the suspension of the MCE for Sekondi-Takoradi, Abdul Mumin Issah, over an altercation with a Police Officer, Dan Botwe said more of such actions will be taken.

“Government will not shield any official whose conduct sends wrong signals. It is in the interest of government that such officials when assigned, do exactly as they have been instructed to do, that is to serve the people. When they put up unsavoury conduct however, government will have no other option than to penalise them.”

See also  Kwabena Frimpong To MMDCEs: Collaborate With Your Party Executives, Members Of Parliament For Development

President Nana Addo Dankwa Akufo-Addo suspended the STMA Mayor from office following allegations he verbally assaulted a police officer and obstructed him while on duty.

Mr. Issah, during an altercation with a police officer, who stopped him for driving on the shoulders of the road to move past a police snap checkpoint, was heard threatening to transfer the officer to Enchi.

He also described the police officer as “ugly” and said he would have beaten him to death if he had attempted anything silly.

Meanwhile, Abdul-Mumin Issah is confident that he will be exonerated.