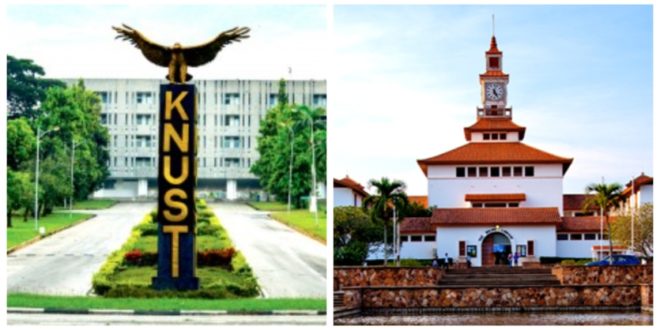 The Kwame Nkrumah University of Science and Technology (KNUST) has been ranked the 12th best in Africa ahead of the University of Ghana, which placed 29th in the 2022 Global Universities Rankings.

Based on their research performance and ratings by members of the academic community across the world, KNUST and UG were also ranked 587th and 916th, respectively, on the global front.

Globally, the KNUST scored 49.9 and ranked 484th in Social Sciences and Public Health. It also secured the 277th spot in Clinical Medicine, with an overall score of 56.2.

On the other hand, the University of Ghana secured a global score of 41.4, the eighth annual USNews and World Report Global Universities Rankings said.

However, it performed better than KNUST in Social Sciences and Public Health with an overall point of 41.6, making it the 326th best globally.

In the field of Clinical Medicine, UG was ranked 566th, trailing behind its Kumasi-based competitor.

None of Ghana’s public universities made it in the top 10.

The University of Cape Coast was recently ranked the number one university in Ghana, the top in West Africa and part of the top five universities in Africa in the 2022 Times Higher Education annual rankings.

The rankings were produced to provide insight into how universities compare globally.

“Since an increasing number of students plan to enrol in universities outside of their own country, the Best Global Universities rankings – which focus specifically on schools’ academic research and reputation overall and not on their separate undergraduate or graduate programs – can help those applicants accurately compare institutions around the world,” the USNews explained.

The University of Cape Town in South Africa has been ranked the first and best university in Africa and 109th globally.