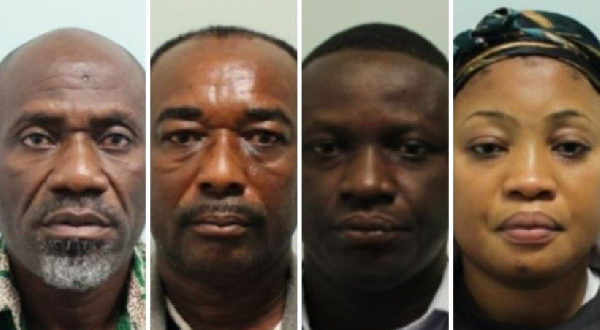 A joint operation between Ghanaian officials and their counterparts from the United Kingdom has led to the arrest of 4 suspected drug traffickers.

The team found in their possession 38 kilogrammes of cocaine, estimated to be valued at £2.88 million.

In a statement released by the Narcotics Control Commission, it stated that it had been investigating the activities of the gang since January 2021.

The suspects had been moving their illegal substances through the Kotoka International Airport.

According to NACOC’s Head of Communications and Media Relations, Francis Opoku Amoah, investigations led to the arrest of Eric Kusi Appiah at Heathrow Airport on April 30, 2021, for attempting to traffic 17kgs of cocaine worth £1.3 million into the UK which was hidden in food boxes.

This triggered a joint operation between NACOC and NCA – UK dubbed “Operation Grid,” geared towards uncovering other members of the syndicate

Julius Tetteh Puplampu, an ex-convict, who was jailed 10 years in 2012 for the same offence in Ghana, was arrested at Heathrow after trafficking cocaine from Ghana by concealing it at the base of his suitcase.

See also  No ‘Aboboyaa’ On Highways From November 1

“On 7 December 2021, two more individuals linked to the syndicate were arrested in Ghana for their involvement in the case,” the statement added.

Eric Appiah and Albert Kaakyire Gyamfi have since been jailed nine years. Jennifer Agyemang was sentenced to six (6) years and nine (9) months imprisonment.

It says it is committed to protecting the country’s borders from criminal drug syndicates.