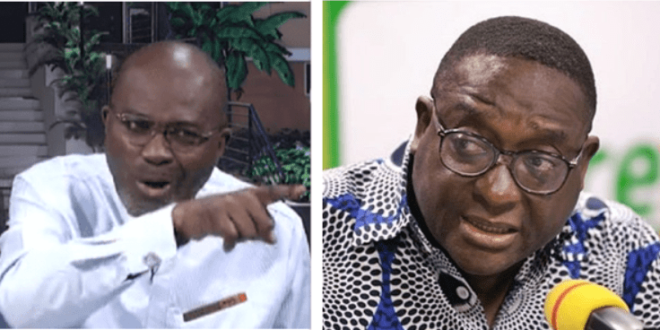 The Assin Central member of parliament, Kennedy Agyapong, has blamed the communications director of the New Patriotic Party (NPP) Yaw Buaben Asamoa for the woes the governing party is going through at the moment.

Agyapong fired salvos at Asamoa after the latter questioned his authority to ask the party’s leadership to sack the Member of Parliament for Dome-Kwabenya, Sarah Adwoa Safo over her failure to attend sittings.

“I don’t think Kennedy Agyapong should be in a position to determine to the world what we are discussing indoors. I think it’s not fair to the party at this time… it only compounds the difficulties if any. I don’t think individuals ought to be telling the world whichever way to go. He should be disciplined,” Asamoa told GTV.

See also  Kennedy Agyapong To Privileges Committee: I Absented Myself From Parliament Due To ill-Health

Reacting to Asamoa’s assertion on The Asaase Breakfast Show on Tuesday (22 February), a visibly furious Agyapong said: “That guy should be fired, he is waste, he is a waste to the party, what role has he played?”

“The problem we [the NPP] have with communication is because of the arrogance of Yaw Buaben Asamoa. He lost in his constituency because of this arrogance and now he is coming up with a tweet,” he added.

“If we have people like Yaw Buaben Asamoa [in the NPP] then we will lose the election; he insulted me in conversations in December and I ignored him and he went ahead … and lost his election,” Agyapong claimed.

Adwoa Safo is demanding for the removal of Deputy Majority Leader, Alexander Kwamena Afenyo-Markin before she would return to Parliament, Kennedy Agyapong alleged.

Agyapong said his colleague lawmaker from Dome-Kwabenya cannot hold the party to ransom.

“Adwoa now is saying that before she comes [to Parliament]… ‘you have to remove Alex Markin as Deputy Majority Leader, announce it that Alex Markin has been removed’ then she will take a plane and come.”