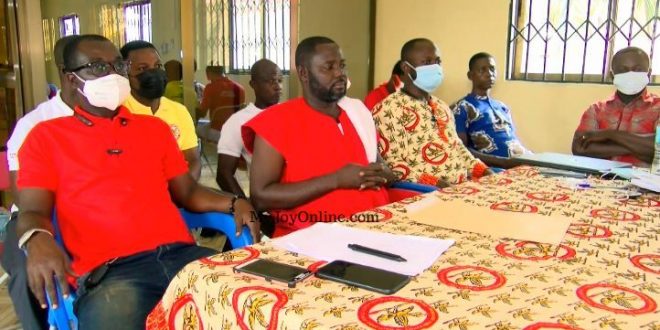 The National Association of Graduate Teachers (NAGRAT), and the Coalition of Concerned Teachers (CCT), have intimated that any further delay in the payment of salaries of its members for the month of February will put a huge financial burden on their members.

According to the President of NAGRAT, Angel Carbonu, the government is yet to salaries for the month of February.

This is in spite of the fact that the government had scheduled to pay February salaries by the 25th of this month. There’s anxiety among many public sector workers over the delay, particularly at a time when the government is said to be struggling with its finances.

Speaking at a press conference in Accra today, Tuesday, the President of NAGRAT, Angel Carbonu, questioned the delay and asked the government to come clean on plans to remedy the situation.

‘“We would have expected that even without prompting from the leadership of the various workers’ unions, the government itself would have initiated some great news to lessen the effect of this economic hardship on the Ghanaian worker, especially when there have not been any upward adjustments.”

Defending why the unions boycotted the labour conference despite an invitation from the government, Angel Carbonu noted that the forum was not the appropriate platform to address the myriad of unresolved issues they have tabled before the government.

“We do not see the need to attend a Labour conference that does not alleviate our plight in any way.”

The Speaker of Parliament, Alban Bagbin, recently disclosed that government may not be able to pay salaries for the next three months. Making the revelation on the floor of the Parliament, the Speaker called on MPs to show leadership in these difficult times.”

“This is not to discourage the committee from doing their work. If something is not done within the next three months, the government may not be able to pay salaries.”

But a Deputy Minister for Finance, Dr. John Kumah, has debunked the Speaker of Parliament’s assertion that government may not be able to honor its salary obligations from the next three months.

See also  Rawlings Came Through For Me In My Difficult Moments As President – Akufo-Addo
Source: citinewsroom.com

I'm Adwenpa-Hene |Blogger & Broadcaster Journalist. I am the CEO and manager of this noble website. I publish on Entertainment, Sports, Politics, Lifestyle, and Technology. You can also follow Us on : YouTube Channel - My Ghana Media TV, Facebook - MyghanaMedia TV , Twitter - @MyGhanamedia2 & Instagram - My Ghana Media TV. Email Address: [email protected] Contact Us: 0200818719
@@MyGhanamedia2
Previous MTN FA Cup Round Of 16 Draw : Here Are The Full Fixtures
Next Ghana: Over 500,000 Ghanaians Are Divorced, 400,000 Separated – 2021 Population Census Reveals