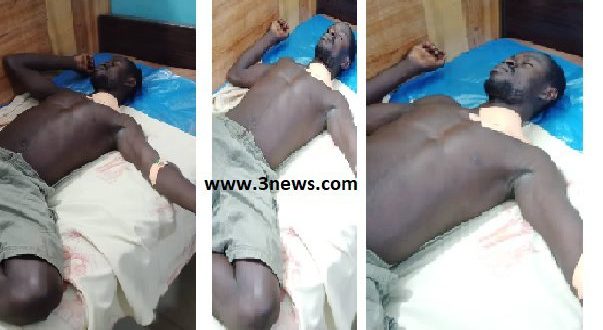 A primary school teacher with the Kogyina M/A Primary School in the Bibiani Anwiaso Bekwai Municipality of the Western North Region has been hit by a stray bullet.

Narrating how the incident happened on Connect FM’s Omanbapa morning show, the teacher, Prince Badu Dankwa, indicated that he was on his way to school when his vehicle developed a fault along the way.

“Immediately I alighted from the vehicle, I saw some police officers arguing with Okada riders at the same junction. One of the officers started firing and one of the bullets hit the section between my neck and shoulder,” Prince Badu Dankwa added.

He was rushed to the Bibiani Government Hospital, where medical officers operated on the neck.

“A bullet was removed from my neck at the hospital,” he said.

According to the teacher, he can easily identify the police officer who fired the shot and called on the police hierarchy to ensure that justice is served.

Responding to the complaint, the Bibiani Municipal Police Commander, Superintendent Augustine Mensah, admitted to the gunshots.

He, however, indicated that the gunshot was not intentional.

He adds that one of the arrested Okada riders tried to snatch a gun from one of the police officers and that led to the gunshot.

“Our patrol team went to the Junction for operation with the aim of arresting unregistered motorbikes. Some of the Okada riders were arrested but some of the arrested tried to escape.

“One of them boldly grabbed the gun of a police officer. A confrontation ensued and the gun mistakenly fired. We cannot tell if the teacher was directly hit by a bullet or something else,” he indicated.

Supt Augustine Mensah further assured that his outfit will ensure thorough investigations are conducted into the case and anyone found culpable will not be shielded.