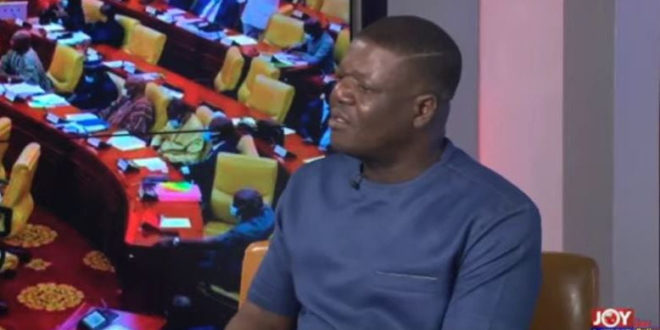 The Member of Parliament for South Dayi, Rockson-Nelson Dafeamekpor, has spoken against the misconception about Members of Parliament enjoying free fuel.

According to him, MPs pay for the fuel they use in transporting themselves.

The National Democratic Congress (NDC) MP also stated that legislators are not provided with free food.

Speaking on JoyNews’ AM Show, he recounted the number of times he and his colleagues have purchased kenkey and fish for lunch.

“People think that we get free fuel. Somebody told me last week he is horrified we buy our fuel. People think we are fed every day in Parliament. We buy our food.

“We are not given free food and fuel every day as people think,” he said.

Interacting with host, Benjamin Akakpo, on the hike in fuel prices, he stated that the average Ghanaian is not the only one affected by the surge since “the prices are biting all of us.”

Since the beginning of the year, Ghanaians have registered their dissatisfaction with the high prices of fuel at the pumps. They have called on the government to mitigate the effects by removing some fuel taxes.

Some social media users have even called for MPs to pay for their fuel to appreciate matters on the ground.

In less than two weeks, the prices of diesel and petrol have increased by over 30 percent and are selling at ¢8.29 at the pumps. Due to this, commercial drivers have adjusted transport fares upwards by 15 percent.

Due to this, the Minority in Parliament has served notice it will haul the Finance Minister, Ken Ofori-Atta, before the House to present the government’s response plan to end the hikes in fuel prices.

Meanwhile, the South Dayi MP has also revealed that legislators are also encountering similar difficulties with the delay in payment of salaries.

Mr. Dafeamekpor stated that as of Thursday, March 3, he is yet to receive his salary for February.

“There is a schedule for paying public service. We ought to have been paid by now,” he said.

According to him, he is unaware of any reason for the delay in payment of his salary.

On February 17, beneficiaries of the government’s Nation Builders Corps (NABCo) programme hit the streets in protest of what they call an undue delay in paying their allowances.

An extension of their service period by the government has not been followed with the necessary financial commitment as many of them are yet to be paid in the past six months.