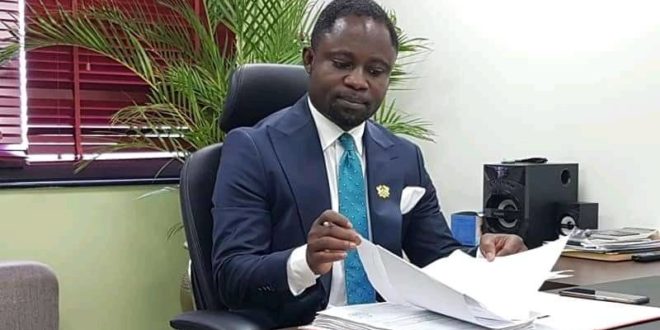 The Member of Parliament for Juaboso and also Ranking Member on Parliament’s Health Committee, Kwabena Mintah Akandoh, has accused the government of deceiving Ghanaians about the Agenda 111 initiative.

According to him, President Akufo-Addo is prepping Ghanaians ahead of time, to accept his failure to deliver on the said initiative.

Speaking in an interview with the NDC lawmaker stated that right from the outset, President Akufo-Addo knew that he could not build 111 hospitals under 18 months.

The MP said, the President only made that promise for political expediency; adding that Akufo-Addo’s new timeline for the completion of the project is evidence of the government’s deception regarding the Project.

In the 2021 Budget, it was clearly stated that 101 hospitals have been awarded. That was the language used in the Budget. Now in the 2022 Budget, the language then changed to cadastral plans being ready. This is clear deceit”, he stated.

The Juaboso MP also added that funding for the project has not been made clear by the government; an evidence of the insincerity on the part of the President.

During President Akufo-Addo’s State of the Nation Address on Wednesday, he promised to ensure the completion of the Agenda 111 Project, by the end of his tenure as President in January 2025, stating that the initial timeline was overly ambitious.

“I have to report that, like all major construction projects, it is evident that the initial schedule we gave for the completion of Agenda 111 was overly ambitious. Identifying suitable sites around the country, for example, has turned out to be even more problematic than had been anticipated.

I am able to say that a great deal of the preparatory work has now been completed, and work has started at 87 of the 111 sites. I have been assured that preliminary work on the remaining 24 sites is ongoing.

We have every intention of seeing this project through to a successful end, which will enable me to commission all one hundred and eleven 111 hospitals before I leave office on 7th January 2025”, he said.

It is against this background that the Juaboso MP and Ranking Member on Parliament’s Health Committee, Kwabena Mintah Akandoh accused the President of being insincere about the Project.

In stating his reservations, he further lamented the lack of clarity in the government’s plan to fund the much-touted Project.

The project is to ensure that Ghanaians nationwide have access to quality healthcare services and with the National Health Insurance Scheme, boost the provision of healthcare infrastructure and financial accessibility to healthcare.

Doctors, nurses and other health personnel will have accommodation in the hospitals to be constructed.

According to the Agenda 111 detailed document, the facilities that will be enjoyed by Ghanaians include four state-of-the-art surgical theatres for maternity, obstetrics and gynaecology, a full complement of male, female, pediatric and isolation wards, among others.

According to government, on completion, the project will be “the biggest investment in healthcare infrastructure in the country since independence”.