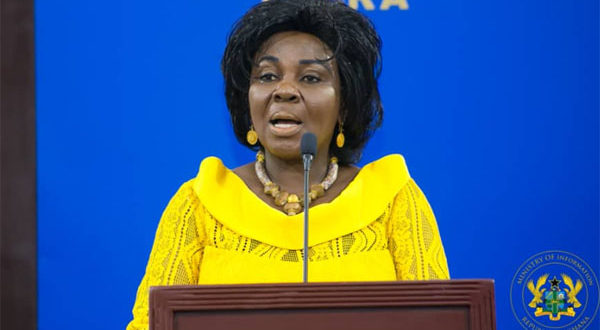 Some angry staff of the Ghana School Feeding Programme (GSFP) are demanding the immediate removal of the caretaker minister and the Chief Director of the Ministry of Gender, Children and Social Protection over the non-payment of their salaries for several months now.

They accused Cecilia Dapaah of ineffectiveness and for also allowing the Chief Director of the Ministry, Dr. Afisah Zakariah, to dictate how the Ministry should be run, resulting in the latter’s refusal to sign for monies to be released for payment of salaries, compensation, goods and services.

Information gathered by Onua TV suggests that Dr. Afisah Zakariah seems to be wielding more powers than all the ministers she has ever worked with. She is the one to determine and control whatever goes on in every department under the Gender Ministry.

According to the aggrieved staff of the Programme, most of whom spoke on condition of anonymity, the Chief Director played active role in the botched attempt by Sarah Adwoa Safo to sack the National Coordinator of the Programme, a decision that was eventually reversed by President Nana Addo Dankwa Akufo-Addo.

According to them, she has succeeded in rendering Madam Abena Dapaah, ineffective, as the caretaker minister has since failed to address concerns and challenges confronting the Ghana School Feeding Programme.

Under her watch, the Programme, the aggrieved staff hinted, has not undertaken any meaningful field operations to ensure sanity, efficiency and proper monitoring for the past two years.

“Our secretariat has no vehicles to go to the field. Our management has to rent vehicles for our operations at an expensive cost. Meanwhile, we heard that a request was made to the caretaker minister for the purchasing of new vehicles out of School Feeding’s own budget allocation, but once again the Chief Director forced the Minister not to sign it.”

Even though government in the 2021 budget approved over GH¢440 million for Ghana School Feeding Programme to be used for operational activities, compensations and goods and services, the Chief Director, who was more or less the acting Minister due to the inconsistency of Sarah Adwoa Safo, unjustifiably failed to allow the School Feeding Secretariat to access the money.

It would be recalled that on March 4, 2022, Onua TV and 3news broadcasted and published an investigation piece that indicated that the Ghana School Feeding Programme had been wallowing in serious financial challenges for the past two years.

The investigations uncovered that over 130 contract staff of the Programme had not been paid for the past eight months, and salaries of permanent staff were also in arrears for months.

All staff of School Feeding including cleaners and drivers did not receive even a Pesewa as Christmas bonus in December 2021.

A confidential document intercepted during the investigations also revealed that management of the social intervention programme did not receive even a cedi for their operational activities for all four quarters in the year 2021.

Further checks by Onua TV two weeks after the publication indicated that the Chief Director, Dr. Afisah Zakariah, to satisfy her cronies at the Ministry, is bent on migrating Ghana School Feeding Programme staff unto the Single Spine Salary Structure, to have their already meagre salary slashed.

This unpopular decision, Onua TV learns, has led to some resistances from the staff including those on contract and political appointees.

Until the migration is done, the Ministry has vowed not to release any funds to the Secretariat for payment of salaries or field operations.

The angry staff are therefore demanding the immediate removal of the Caretaker Minister, Cecilia Abena Dapaah and the Chief Director, Dr. Afisah Zakariah, for the “insensitivity” about their welfare and the future of the Programme in general.

Meanwhile, management at the Secretariat are tight-lipped and efforts to speak to the Chief Director for the Gender Ministry have not also been successful.

Meanwhile, the Parliamentary Select Committee on Gender would be meeting the ministry Thursday, March 31.

I'm Adwenpa-Hene |Blogger & Broadcaster Journalist. I am the CEO and manager of this noble website. I publish on Entertainment, Sports, Politics, Lifestyle, and Technology. You can also follow Us on : YouTube Channel - My Ghana Media TV, Facebook - MyghanaMedia TV , Twitter - @MyGhanamedia2 & Instagram - My Ghana Media TV. Email Address: [email protected] Contact Us: 0200818719
@@MyGhanamedia2
Previous Akufo-Addo Came With A Vision To Industrialise Ghana; Nissan, Peugeot, Toyota Are Already In Ghana – Gabby Writes
Next ‘I Will Pay; I Don’t Have Any Problem With E-Levy’ – Donzy