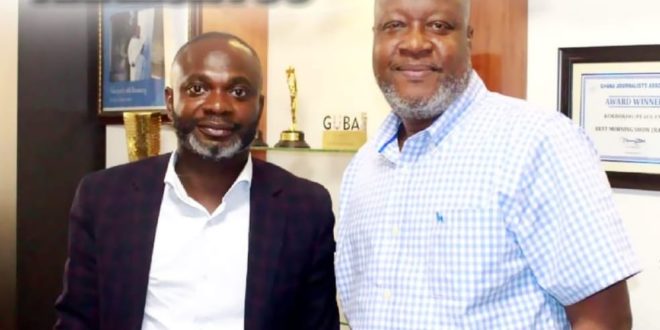 One of the biggest radio personalities in Ghana, Kwami Sefa Kayi, has sat down with Mr. Odi Ahenkan Kwame Yeboah on the  “Abrempong Anamontuo “ to share with the youths how a painfully shy Kwami Sefa Kayi became the ‘Chairman General’ of the Ghana radio space.

The ‘Abrempong Anamontuo’ is a segment with the objective to develop the youth and provide inspiration to listeners by hosting leaders and achievers in various industries in Ghana and beyond.

The broadcast journalist is married with three children; two girls and a boy. His life has not turned out as he expected as a youngster, however – his youth ambition was to be an Army officer, “because I think it is the most courageous and humble thing to do in life”.

The illustrious broadcaster who is widely known as the ‘Chairman General’ by his admirers narrated his fascinating story, as a media person on the ‘Abrempong Anamontuo’on Jun 4, 2021. The famed broadcaster, explained how important family is to him and his desire to bring his dad back to life.

“My father died when I was 19, he died two days after a car crash. It was my first experience of death. It was a shock and a turning point for me. My backbone was gone. My father was this big strong man I looked up to, and for those two days before he passed on he was so vulnerable. If I could change anything about my childhood, it wouldn’t be my parents or siblings. My father would still be alive,” he said.

Replicating his beautiful relationship with his father, in his own life as a dad, he said he cherishes his family and wishes he could be there more. “When you do the kind of work I do, I am up at 4 in the morning, 4:30 at the latest, from Monday to Friday. I’ve been doing it for 25 years now and I started it when I was a bachelor so by the time I had gotten married, I was used to this kind of lifestyle.

Kwami Sefa Kayi  said his dream was to joining the army.

How does a painfully shy young man, whose dream was to serve in the army, become one of the biggest radio personalities in all of Ghana?

If you ask Kwami Sefa Kayi, host of the ‘Kokrokoo’ morning show on the Accra-based Peace FM, it was all by accident.

Veteran Ghanaian Broadcaster, Mr. Kwami Sefa Kayi  reveals this in an exclusive interview on with Mr. Odi Ahenkan Kwame Yeboah the host of  “Abrempong Anamontuo “ on the Akyem Aboabo based Ahenkan 93.3 FM.

“I really, really, really wanted to be an army officer,” he added, saying he was inspired by his father who was an officer. But, years passed, and without a military job on the horizon, Kwami landed a job in the media, “by accident,” he said.

“Looking back now, I think it was more designed than I think.”

He joined a drama group held at Ghana Broadcasting Corporation where he would later get his first lesson in radio journalism.

Kwami said his father, who died when Kwami was 19, would be proud of him, for “at least he did not end up on the street.”

Kwami is from a family of three; himself, a brother who passed away some years ago, and a sister. His mum was very supportive when he chose his career, and she is one of his biggest fans and critics, he said.

Other critics in the past have labeled Kwami as shy, but it was hard to tell during the interview. Dressed in jeans and a long-sleeved shirt, the broadcaster sat at Labone Coffee Shop earlier this week and told his story looking relaxed and speaking openly.

Living a day at a time, the multiple award winner who loves to read and play tennis as his hobbies, Kwami said he finds the media in Ghana, “so lovely and wonderful: you can tune in to the radio and TV or pick a newspaper and expect a juicy story” He also thinks the media is a growing industry in Ghana.

Talking about the media today in Ghana, Kwame  also shared his thoughts about why the culture of reading in Ghana is said to be so weak. He suggested that it is either that the parents are not encouraging their wards to read, or because of technology where children are more into cartoons and computer games.

The situation now is unlike when Kwami was young, and “if you don”t read mummy will kill you and when she says that she really means it”.

He also advice the youth of today who are into journalism to take it seriously because it is a profession not a steeping stone, he said. Instead young journalists should commit themselves into it and put in more effort. “Don’t be persuade about the shining life in it,” he said, advising that despite the enticements of sole, journalism can be a hard life with little money.

Now, however, Kwami is doing well for himself, and joked about how he has moved on from the local tro-tro transport to his mother’s place at Okponglo, to now driving a Mercedes Benz.

Describing his life now, he explained how important his family are to him, supporting his busy career even though “the kids aren’t quite sure what I do!”

For now, he is content with his journalism role: “I am happy because I love what I do.”

But, would Kwami still heed a call from the armed forces? “If the army will hire me for five years, I think I will do [it]” he says.

Watch the full interview below:

ABREMPONG ANAMONTUO SERVES SUCCESS ON THE PLATE FOR MOST GHANAIANS

The drive time show dubbed “ABREMPONG ANAMONTUO” which is aired every Friday evening at 7:00PM  on Ahenkan 93.3 FM has brought a new trend of vibrancy in the Youth.

This show Hosted by the popular Journalist, Odi Ahenkan Kwame Yeboah and Co-hosted by ace Journalist, Adwenpahene Kofi Mensah has now become the new Dawn of hope for many especially in the Eastern Region and it’s Environs.

The show invites and interviews personalities of high prominence who are making impact in the Ghanaian society and have climbed the ladder of success through determination and hardwork.

The show began in May, 2021 and has influenced many in the society with credits in the global space as it reveals life-changing secrets to be able to succeed both in personal and career life.

Ghanaians have taken to social media and other platforms to congratulate and thank the CEO of Odi Media Network, Odi Ahenkan Kwame Yeboah for such a transformational program, phoning in on the live radio to give accounts on how they have been impacted.

Some Ghanaians shared that, they had no idea on how to start a business with nothing but the show revealed a walkthrough experience which got them started.

Others living around Akyem Oda and its Environs shared that they got to know how to raise money for their project as they listened to the show.

I'm Adwenpa-Hene |Blogger & Broadcaster Journalist. I am the CEO and manager of this noble website. I publish on Entertainment, Sports, Politics, Lifestyle, and Technology. You can also follow Us on : YouTube Channel - My Ghana Media TV, Facebook - MyghanaMedia TV , Twitter - @MyGhanamedia2 & Instagram - My Ghana Media TV. Email Address: [email protected] Contact Us: 0200818719
@@MyGhanamedia2
Previous Majority Leader Chairs CPA Meeting In India As Ghana Prepares To Host Conference In 2023
Next Gameboy Tagoe Loses By Unanimous Decision To Ryan Garcia [ Highlights & Review Of The Fight]