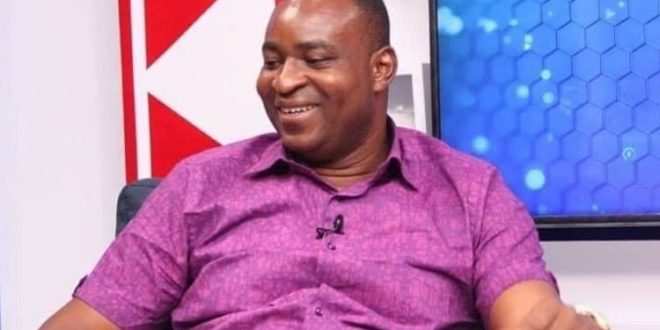 Before becoming a mining magnate, the Ashanti Regional ruling New Patriotic Party’s Chairman, Bernard Antwi Boasiako  (Chairman Wontumi) worked in different capacities in his quest to survive and make a name for himself. Having enrolled in Prempeh College and later in a Bible school in Chicago, Wontumi who had earlier aimed at becoming a minister of the gospel had to turn his attention to some other avenues while in London.

“Before I left Ghana, I had about twelve fellowships so those who really knew me knew I was into ministry. I stayed in London for so many years. My first job was cleaning, usually referred to as ‘masters work’” he told Delay in Twi on The Delay Show as he chronicled his journey to success.

“Croydon Whitgift Centre, I was a cleaner there before I ended up at the gym. I became an instructor; I was the most physically built individual at the gym. I later turned into a bouncer and bodyguard. I returned to Ghana afterwards.”

According to the politician who is the Ashanti Regional Chairman of the ruling New Patriotic Party (NPP), he left London for Ghana due to some difficulties he encountered. His stay in Ghana, was, however, not rosy.

“The lady I took as a wife and begot children with, in London, we had a challenge, we had a problem. That was why I came back to Ghana. My boss, the one I guarded, also came to Ghana,” Wontumi said.

Upon his return, he stayed with a lady in Tema. The said lady, according to information gathered by the host, Delay, assisted Chairman Wontumi, a statement which was cunningly corroborated by the politician.

“Everybody needs help,” he responded. “At the time, things were really difficult for me, I have to be sincere.”

He insisted that the lady was just a friend and he stayed with her for about five months. The burning desire to succeed informed his decision to import noodles but that was not without hiccups.

“I was the first person to bring noodles to Ghana. But unfortunately, because it came from Korea, the inscriptions were not in English so Standard Board and Food and Drugs Board delayed us. By the time they handed over the goods to us, they had expired,” Wontumi said.

Regardless, he continued with the noodles business as he engaged some shops in Kumasi but that moment was short-lived. Although he could have returned to the UK, Wontumi said he decided to stay in Ghana and recoup the money he lost from doing business in the country.

“I used to supply the noodles to many shops including Boogies Supermarket which was owned by an Indian. So, when things became difficult, I went to them and pleaded for help,” he said while adding that he was about 26 years old at the time.

As smart as he was, Wontumi said he registered a security company in Kumasi with his earnings and employed people.

He later had an opportunity to become a miner when someone showed him a piece of land. Since then, Wontumi said, he has been a miner and a farmer.

“I started doing galamsey. That is the truth; but now, I have a mining company. I have a big piece of land. I have about a hundred thousand acres of land at Atebubu and Beposo,” Wontumi mentioned.

Watch the interview below.

I'm Adwenpa-Hene |Blogger & Broadcaster Journalist. I am the CEO and manager of this noble website. I publish on Entertainment, Sports, Politics, Lifestyle, and Technology. You can also follow Us on : YouTube Channel - My Ghana Media TV, Facebook - MyghanaMedia TV , Twitter - @MyGhanamedia2 & Instagram - My Ghana Media TV. Email Address: [email protected] Contact Us: 0200818719
@@MyGhanamedia2
Previous Somalia’s New President Elected By Only Members Of Parliament
Next Ambulance Workers : We Are Facing Threats From Robbery Attacks, We Need Police Escort