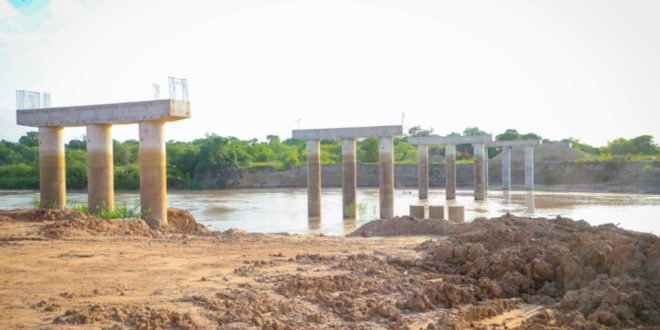 The Vice President, Dr Mahamudu Bawumia, has inspected on-going construction works on the Mishio-Yagaba bridge in the Mamprugu-Moaduri District in the North East Region.

He also inspected the 9.5km Mishio-Woyama road, which is being constructed alongside the bridge.

Communities in and around Mishio and Yagaba are completely cut off during rainy seasons, as over five kilometres of the area gets drowned for weeks, making it completely inaccessible for motorists and indigenes.

Dr Bawumia, who is on a five-day working visit to the northern part of the country, toured the site on Saturday, June 11. 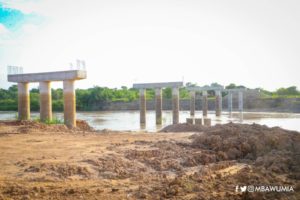 He expressed delight at the project, adding that no government had attempted to solve the problem since independence except the Akufo-Addo government.

According to him, the government will respond to the plea of the communities and have a permanent solution to the perennial, devastating flooding in the area. 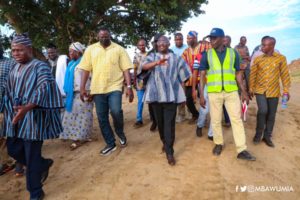 “It is a very big bridge that is going to help the people of the area and Ghana as a whole because it will improve agriculture and contribute to the national economy,” Dr Bawumia said.

The Vice President said, currently, it takes over three and half hours to drive from Walewale to Yagaba, the next town after the flood-prone area where the bridge is being built. 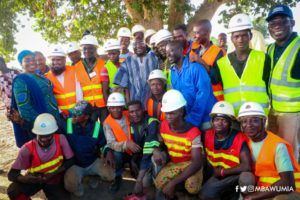 He explained that after the bridge and the road are fixed, it would take only 40 minutes to get to Yagaba from Walewale.

Again, after the construction of the road, commuters from the area, especially parts of the North East Region will be able to connect to Wa using the bridge in a much shorter time.

Contractors on site assured that with the sub-structure of the bridge done, they would soon fix the steel component of the bridge during the dry season before they turn attention to the final phase of the road.