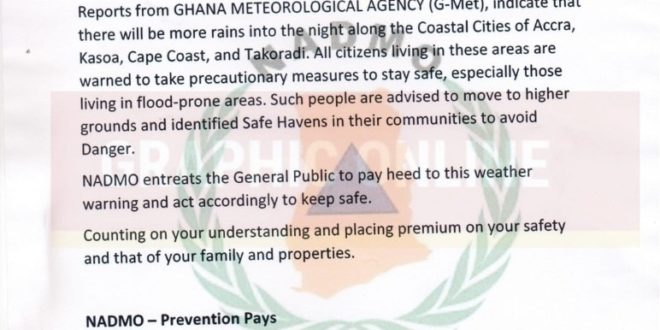 The National Disaster Management Organisaton (NADMO) says reports it has received from the Ghana Meteorological Agency show that there will be heavy rains across the country this evening, Wednesday, June 15, 2022.

NADMO has thus asked citizens living in flood-prone areas to take precautionary measures ahead of the rains.

Citizens living in Accra, Cape Coast, Takoradi and Kasoa have been advised to move to higher grounds and identify safe havens in their communities to avoid danger.

NADMO made this plea in a press statement.

“Reports from Ghana Meteorological Agency (G-Met), indicate that there will be more rains into the night along the Coastal cities of Accra, Kasoa, Cape Coast and Takoradi.”

“All citizens living in these areas are warned to take precautionary measures to stay safe, especially those living in flood-prone areas. Such people are advised to move to higher grounds and identify safe havens in their communities to avoid danger,” portions of the statement said.

Some parts of Ghana were flooded following hours of downpour on Wednesday. The rains, which began around 10 am, continued throughout the day.

In Accra, areas such as Adabraka, Osu, Kaneshie First Light, Trade Fair, Accra Central, among other areas, had drains unable to contain floodwaters after the rain.

There was also flooding at the Koforidua Adweso Estate in the Eastern Region.

Properties running into thousands of cedis were destroyed by the rains at Westend Ridge, a suburb of Cape Coast in the Central Region. 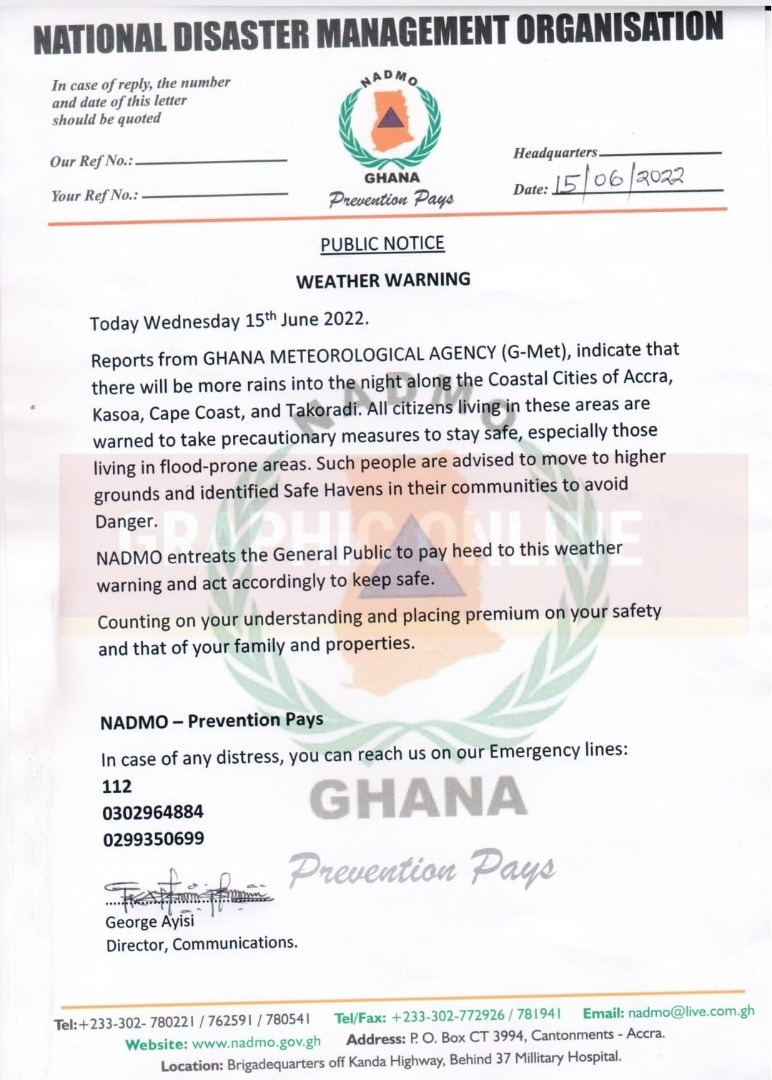 I'm Adwenpa-Hene |Blogger & Broadcaster Journalist. I am the CEO and manager of this noble website. I publish on Entertainment, Sports, Politics, Lifestyle, and Technology. You can also follow Us on : YouTube Channel - My Ghana Media TV, Facebook - MyghanaMedia TV , Twitter - @MyGhanamedia2 & Instagram - My Ghana Media TV. Email Address: [email protected] Contact Us: 0200818719
@@MyGhanamedia2
Previous The Crisis Of Debt And Oil Price Shocks: The Looming Storms In Ghana
Next Seven-Year-Old Girl Dies After Heavy Rains In Walewale