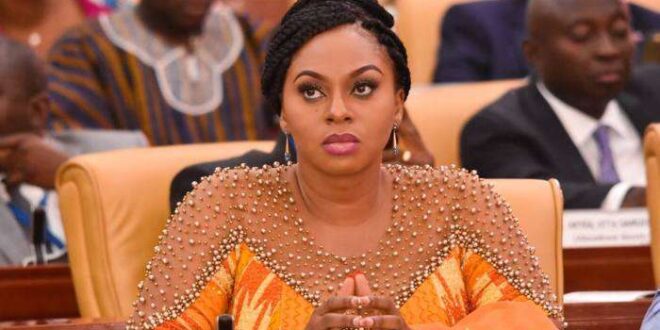 Adwoa Sarfo In Hot Water; As Petition Filed For Her Removal

A Citizen of Ghana, named, Dr. Frank Amoakohene, who describes himself as the Executive Director, of the Democratic Forum has filed a petition to the Presidency for the removal of Minister for Gender and Social Protection, Sarah Adwoa Safo from office.

The Petitioner also wants the President to appoint a new face for that portfolio.

On October 6, 2021, President Akufo-Addo extended the leave of absence from office for the Gender Minister.

The Dome-Kwabenya MP’s leave, which she sought for personal reasons, was supposed to have ended on August 31, 2021.

However, the former Procurement Minister could not resume and requested an extension. It did not, however, state when she will resume.

“In her absence, and until further notice, President Akufo-Addo directed the Minister for Sanitation and Water Resources, Cecilia Abena Dapaah, to act as caretaker Minister,” the Presidency had said.

But the Democratic Forum finds the Minister’s inability to perform her duties as “sad” and a “disappointment”, as it further chastises the presidency for its loud silence over the development.

“Mr. President, it is however sad that the Gender Minister has been off post since December 2021 and has not been available to perform the duties for which reason she was appointed”.

“Ghanaians, especially women and children, are filled with so much disappointment because, the minister who is supposed to work in their interest has abandoned post. Yet, the presidency remains silent on such a grave matter”.

“Mr. President, the Democratic Youth Forum is, by this petition, beseeching you to, as a matter of urgency revoke the appointment of Adwoa Sarfo in line with article 81(a) of the 1992 Constitution and make new nominations or confirm the Deputy Minister as substantive minster, to enable her lead the Ministry to attain its set out vision”, the petition read in part.

The youth-based organization wants the presidency to “act urgently and accordingly within two weeks; failure of which may compel us to cause Parliament through the Speaker to initiate a vote of Censure by article 82 of the 1992 Constitution”.

Meanwhile, Sarah Adwoa Sarfo is expected to appear before members of the Parliament’s Privileges Committee on July 6, either in person or via video conferencing platform Zoom.

This is after several attempts to reach her proved futile.

She is expected to answer questions, about her continuous absence from parliamentary duties.