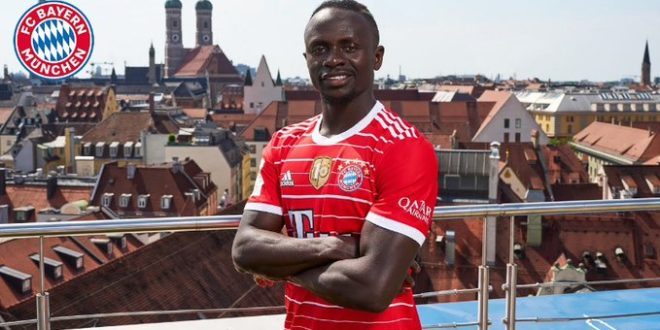 Bayern Munich announced the signing of Senegal forward, Sadio Mane earlier on Wednesday, June 21, with the player penning a three-year deal with the German club.

Mane joins Bayern from Liverpool, where he had just 12 months left on his deal.

After completing the switch to the Bundesliga champions, the 30-year-old spoke about his new adventure in Germany.

On the city of Munich

“I’ve been here for two days and I’ve spoken to a lot of fans. It’s a beautiful city. I’m already in love. I am happy to be able to live here.”

On what made him choose Bayern

“When Bayern showed interest in me, I spoke to them and was so fascinated by the project that I didn’t have to think twice. I had other offers, but I chose Bayern because they are the right club.”

On whether he spoke to Bouna Sarr about the move

On which shirt number he wants to have

“We haven’t talked about that yet. There are many nice numbers, I will decide when the time comes. That doesn’t really matter to me at the moment.”

On whether he spoke to Klopp about moving to Germany

“He’s a great coach and we have a great relationship. But I’ve always watched a lot of the Bundesliga, especially during my time in Salzburg. So I know it very well myself.”

“Servus. I will answer in English and it will probably take another three months before I can speak perfect German. When FC Bayern showed interest, I spoke to my agent. I always thought Bayern is the right club for me. I’m here to help them win more titles.”

On what his move means to Senegal

“As a player, you always represent your country. We Senegalese always try to represent our colours in the best possible way. Of course, I want to make everyone proud in my home country.”

On Thomas Muller welcoming him

“Thomas Muller seems like a nice guy, even though I don’t know him yet. I can’t wait to join the team and get to know everyone.”

On the upcoming African Player of the Year Award

“These are individual prizes. These are the fruits of your hard work. I’m excited to see how it will turn out. Such awards are always motivating, I don’t want to downplay that at all.”

On the secret behind being rarely injured

“It takes a bit of luck, but I take care of my body and work on myself. I have dedicated my life to football.”

Having won the Africa Cup of Nations with his country earlier this year, the forward also led Senegal past Egypt to secure a World Cup spot in Qatar.

I'm Adwenpa-Hene |Blogger & Broadcaster Journalist. I am the CEO and manager of this noble website. I publish on Entertainment, Sports, Politics, Lifestyle, and Technology. You can also follow Us on : YouTube Channel - My Ghana Media TV, Facebook - MyghanaMedia TV , Twitter - @MyGhanamedia2 & Instagram - My Ghana Media TV. Email Address: [email protected] Contact Us: 0200818719
@@MyGhanamedia2
Previous 9-month-old Gets Monkeypox In Ghana, 18 Cases Recorded
Next KMA To Demolish Illegal Structure To Obviate Floods