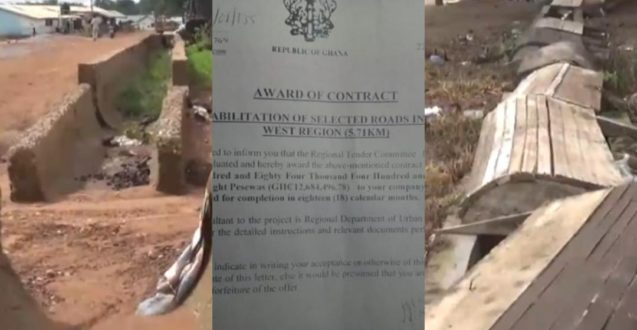 JoyNews’ investigations have revealed how a company linked to the Deputy Sanitation Minister, Amidu Issahaku Chinnia, and registered in the names of his brother, cousin, and personal driver won government contracts at the Upper West Regional Coordinating Council during his tenure as Deputy Regional Minister.

The Batuowiisi Company Limited was set up in 2017 barely a month after his appointment and in the same year won a 2.6 million cedi Planting for Food and Jobs contract.

They were again awarded a 12.6-million-cedi road contract in 2019 by the Upper West Regional Coordinating Council.

Documents sighted by JoyNews show that on 22nd July 2019, Batuowiisi Company Limited was awarded a contract by the Upper West Regional Coordinating Council to rehabilitate a 5.7-kilometer selected town roads in Tumu. The contract sum was over 12 million cedis.

The Batuowiisi Company Limited was supposed to have gone to the site on 22nd November 2019, the firm issued its notice to commence work on the same day for commencement on 5th December 2019 and complete the road projects on 4th June 2021.

Eight weeks after the date of commencement, the company failed to mobilize to the site to commence work, contrary to its programme of work.

When JoyNews visited Tumu, the bridges constructed by the contractor remain flooded and partially buried under weeds. The culverts are choked with silt and weeds. It has left in its trail dissatisfaction and agony to the many traders who ply their trade in Tumu in the Sissala East district. The Upper West Department of Urban Roads office pegs progress of work at less than two percent.

Nashiru Nashara, a trader says the current state of the road is affecting their business.

This assertion was corroborated by a middle-aged trader, Mumuni Maria. She is appalled by the state of the roads and wants swift government intervention.

This road contract was awarded to Batuowiisi Company Limited barely three months after the roads and highways ministry issued the company with a certificate to commence work.

According to records from the Registrar General’s department, the Batuowiisi Company Limited, was set up on the 12th of April, 2017 barely a month after parliament’s appointments committee approved the nomination of then deputy Upper West Regional Minister, Amidu Issahaku Chinnia.

The company directors were Abdul Bazak Chinnia, the Deputy Minister’s brother, Olantunji Amuda, his cousin and Dimbie Yahaya, his driver.

Executive Director of Community Development Alliance Ghana, Salifu Issifu Kanton, has been advocating for the rehabilitation of the selected town roads. As an indigene of Tumu, he says the frustrations of the people are evident in their disappointment in successive government.

But, according to him, the state of the roads and the circumstances surrounding how the contract was awarded raises concerns of conflict of interest.

He said the selected town road earmarked for rehabilitation is a game changer in opening up Tumu township to business.

Project Manager, Alhaji Keba Mahama, is the contractor who worked on the bridges and culverts. He says the contract was sublet to him by Dimbie Yahaya, the driver of the deputy minister. He says work has stalled because of funds. But, that was not the promise made to him when he was first contacted to take up the project.

When JoyNews contacted the Roads and Highways Ministry for details on the project, Acting Chief Director, Dr. Abass Awulu, said the contract was awarded through open competitive tender and was advertised in the Ghanaian Times.

Three firms bought the tender documents and submitted same on the closing date. On the question of how a company with no track record in road construction was awarded this contract, he said the evaluation of tenders went through post qualification exercise at the end of which the lowest evaluated tender, the Batuowiisi Company Limited, was recommended for the award by the Upper West Regional Entity Tender Committee.

“The process followed for awarding this contract was the national competitive tendering procedures as prescribed by the public procurement act, 2003.”

There is even more, a memo obtained from the ministry of food and agriculture dated 24th February 2020 said the Batuowiisi Company limited owned by the Deputy Upper West Minister accessed farm inputs under the planting for food and jobs campaign.

The memo addressed to the Upper West Regional Minister, Dr. Hafiz Bin-Salih, was for him to impress on his then-deputy to pay the balance owed the Agric Ministry. When JoyNews caught up with the Director of Crop Services, Seth Osei-Akoto, he said the ministry has engaged with the Deputy Sanitation minister and Member of Parliament for Sissala East to structure a payment plan to offset the outstanding balance of over 1.3 million cedis.

The big questions are why would the memo address him as the owner of Batuowiisi Company limited? How did his driver, cousin and brother form a company, which secured a road contract with the Upper West Coordinating Council when he was the deputy minister for the same region?

When JoyNews contacted Amidu Issahaku Chinnia, he admitted that he knows the directors of the Batuowiisi Company Limited, but categorically denied influencing any of the processes leading to the award of the contracts.

The deputy minister also pointed out that when the company was bidding for a road contract at the Upper West Regional Coordinating Council he was not aware of the directors of the company. This was two clear years away from when the Batuowiisi Company won a contract under planting for food and jobs campaign at the Agriculture Ministry. The ministry had linked him to the Batuowiisi Company Limited.

Responding to agric ministry’s claims that he is the owner of the company, he indicated that his brother, cousin and his driver who are the directors of the company have written to the ministry to correct the error in that claim. But, that evidence is yet to be submitted to the news team after we placed a request to him.

A tax profile from the Ghana Revenue Authority sighed by the JoyNews Investigative team revealed that in 2018 the Batuowiisi Company Limited paid tax of 600 cedis, in 2019, they paid 600 cedis, in 2020 they paid 3,488 cedis with their tax credits but there is an outstanding tax of 3,250 cedis the company was supposed to pay in 2021.

It has however not paid PAYE for its directors from October 2019 to October 2021. A tax audit of the company’s contracts from 2017 to 2021 by the GRA further revealed that the company is expected to pay a payable tax of 938,493 cedis.

Touching on the GRA tax audit, he said the conclusion that the company was not paying the proper taxes is questionable because the directors of the company say they paid taxes at source.