Breaking News
Home / POLITICS / Justin Frimpong Kodua : I Have Forgiven All 15 NPP Regional Chairmen Who Campaigned Against Me 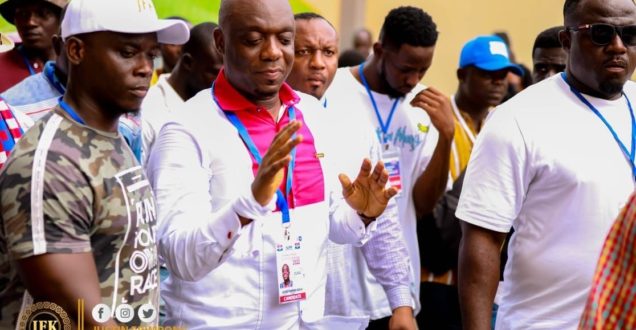 Justin Frimpong Kodua : I Have Forgiven All 15 NPP Regional Chairmen Who Campaigned Against Me

General Secretary of the New Patriotic Party (NPP), Justin Frimpong Kodua says he holds no grudges against anyone who openly campaigned against him at the party’s National Delegates’ conference.

According to JFK as he is popularly called, he did not expect all the delegates including regional chairmen to support him against incumbent, John Boadu.

Aside the Central Regional Chairman, Robert Kutin, 15 regional chairpersons of the NPP openly campaigned against his candidacy as General Secretary.

Led by the Ashanti Regional Chairman, Bernard Antwi Boasiako, popularly known as Chairman Wontumi, they argued that given the experience of Mr Boadu, he stands a better chance of leading the party to victory in the 2024 general election.

But after Saturday’s election, delegates voted massively for Mr Kodua who polled 43 percent as against Mr Boadu’s 42 percent.

He said all those declarations were part of the politics, hence he cannot single out those who opposed him for vengeance.

The NPP scribe indicated that the confidence reposed in him by delegates is an indication that he needs to have a forgiving heart so that he will not allow himself to be engulfed in matters that will not be progressive of the NPP.

“I need them [regional chairmen] more than they need me to be able to have a successful administration,” he added.

Mr Kodua also apologised if he may have offended any party members during the campaign and asked for forgiveness.

I'm Adwenpa-Hene |Blogger & Broadcaster Journalist. I am the CEO and manager of this noble website. I publish on Entertainment, Sports, Politics, Lifestyle, and Technology. You can also follow Us on : YouTube Channel - My Ghana Media TV, Facebook - MyghanaMedia TV , Twitter - @MyGhanamedia2 & Instagram - My Ghana Media TV. Email Address: [email protected] Contact Us: 0200818719
@@MyGhanamedia2
Previous “I Look Forward To Working With You” – Dr. Bawumia Tells New NPP Executives
Next Nursing Trainees Ditch Clinical Practicum Due To Non-Payment Of Allowances