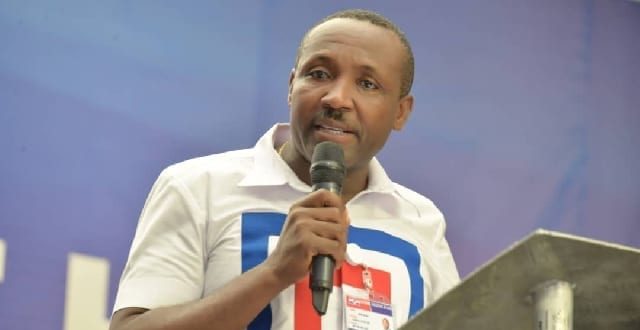 John Boadu: I Have Full Confidence In New NPP Executives’ Ability To Break The 8

Former General Secretary of the New Patriotic Party, John Boadu has pledged his full commitment and support for the party’s new national executives.

The new executives were elected at the party’s national delegates conference held on Saturday, July 16, 2022 at the Accra Sports stadium.

Mr. Boadu who lost his position to Justin Koduah said he will make his years of experience readily available to the new executives, especially his successor.

Mr. John Boadu in a statement urged the party to remain united and forge ahead to break the eight in the 2024 election.

“Following the outcome of last Saturday’s National Annual Delegates Conference of the NPP, which saw the election of New National Officers of the Party, I wish to, first of all, congratulate them for the feat, having earlier done so personally on phone with the newly elected National Chairman, Stephen Ntim and General Secretary, Lawyer Justin Frimpong Kodua, and again wish them well in the task ahead.”

“I again wish to seize this opportunity to openly assure them of my unflinching commitment and support to their administration particularly as we build up to the 2024 General elections, which we are determined to win.”

The former NPP General Secretary said his resolve to “work hard for the NPP to break the eight(8) has become stronger than ever.”

“I remain eternally grateful to the NPP for the huge investments the Party has made in me, and wish to assure the rank and file of the Party, that, I shall avail the years of experience I have gained serving this Party in my entire adult life, to assist this current administration led by Chairman Stephen Ntim,” he added.

See also  Video: “If Am Supporting Alan, Is Alan Not A Human Being" - Kennedy Agyapong Blasts NPP Executives

He further urged his supporters to rally behind the new executives indicating that he has “full confidence in their ability to steer the affairs of the party to make history by winning the 2024 General elections.”

“Once again, congratulations to the Ntim-Kodua-led National Executive Officers. May you lead this Party to Greatness and fulfill the wishes and aspirations of our People,” he added.

The Chief Executive Officer of the Youth Employment Agency (YEA), Justin Frimpong Kodua defeated the incumbent General Secretary of the New Patriotic Party to emerge as the new chief scribe for the governing party.

Mr. Kodua was elected to the position during the NPP’s National Delegates Conference held at the Accra Sports Stadium.

John Boadu served the position since he was appointed as acting General Secretary in 2015 and later elected as a substantive scribe for the NPP.

I'm Adwenpa-Hene |Blogger & Broadcaster Journalist. I am the CEO and manager of this noble website. I publish on Entertainment, Sports, Politics, Lifestyle, and Technology. You can also follow Us on : YouTube Channel - My Ghana Media TV, Facebook - MyghanaMedia TV , Twitter - @MyGhanamedia2 & Instagram - My Ghana Media TV. Email Address: [email protected] Contact Us: 0200818719
@@MyGhanamedia2
Previous AfCFTA Programme To Be Added To Tertiary Education Curriculum
Next GWCL Announces Amnesty For Defaulting Customers