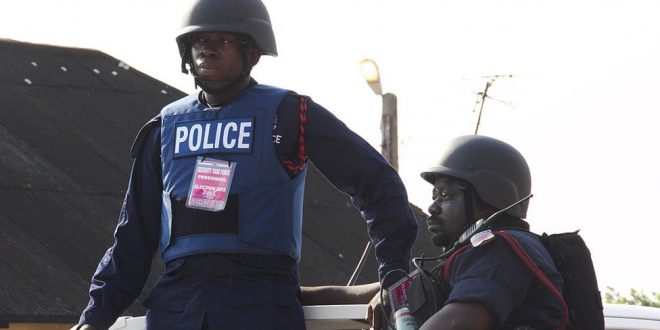 Fresh details emerging over the fracas between the Atwima Kwanwoma District Police Commander and a Corporal of the Formed Police Unit in the Ashanti region indicate that Superintendent Albert Quansah allegedly attempted to snatch a service rifle from Corporal Boakye moments after the former was labelled a criminal in the presence of motorists.

Though JoyNews cannot independently verify this claim, it has been corroborated by multiple sources.

The tussle over the weapon created a tense atmosphere at the Atwima Yabi Lorry Station for several minutes.

Last Wednesday’s conduct of both Superintendent Quansah and Corporal Boakye is being investigated by the Police authorities.

A video on the incident went viral. It shows Corporal Boakye appearing to be disrespecting the District Commander.

Mr. Quansah, in his private car, is said to have first asked the FPU team, including Corporal Bokaye assigned to the area, to move from an accident prone-spot on the Yabi-Afrancho-Foase road.

He later returned in the command’s operational vehicle accompanied by two other policemen to meet the team at the lorry station, and demanded official particulars of Corporal Boakye.

An eyewitness, who pleaded anonymity, told JoyNews that the tussle over the weapon by the two Police officers attracted a large crowd, creating a tense atmosphere.

“There was a struggle for the riffle as the police commander tried to disarm the corporal. The tussle is said to have continued for several minutes and in the process, created a scene. A large crowd pulled up here. At a point, I was afraid the riffle could go off accidentally into the crowd. Many people would have been hurt,” the eyewitness narrated.

Some residents, including motorists, have condemned the conduct of Corporal Boakye.

They accused him and the FPU team of extortion.

“We are not happy with the activities of policemen who come from Kumasi Central. Where they operate from is risky. You see there are sharp bends on this road. But they always mount their barrier sometimes at the hilly section of the road and expect you to stop immediately when they signal you.They have been extorting monies from us. The policemen will not accept GHC2, they only take GHC5,” one driver said.

Meanwhile, the Atwima Kwanwoma District Security Council has scheduled an emergency meeting over the matter.

“I only saw the video last night. I have contacted other members of DISEC and they feel the same way that we should have an emergency meeting to look at the incident.

We arranged to hold the meeting today but other equally important engagements occupied the attention of members. Hopefully, by Friday the emergency meeting will come on,” Chief Executive, Prince Karikari said.

According to Mr. Karikari who is Chairman of DISEC, the Assembly is concerned about the issue.

“Basically, the meeting is to look at the incident and assess how it can affect the security situation in our district,” he said.

“For instance, we have a whole district police ommander who has been grossly disrespected in this manner. How does this build his confidence? How does it affect his confidence? We have to discuss that,” he added.

The Formed Police Unit team was dispatched to the area to help bring down unresolved robbery, murder and other crimes following a collaboration between DISEC and the Regional Police Command.

Their presence, has however lived up to the bill as robbery cases in Yabi-Afrancho-Foase road declined.

Mr. Karikari acknowledged contributions made by the FPU team in the area.

“Those men who were detailed to patrol that stretch of the road are not from this district. That road used to be a robbery-prone area. There was no month we wouldn’t record an incident of robbery on that stretch of road. So their coming here was very, very timely and it has helped a lot. For over 6-months now, we haven’t recorded any incident of robbery, what have you on that particular stretch. So with this fracas, with this disagreement, we don’t know whether they are still going to be here or not,” he said.

For now, the public will keenly monitor the outcome of police investigations into conduct of the senior police officer and the corporal.

I'm Adwenpa-Hene |Blogger & Broadcaster Journalist. I am the CEO and manager of this noble website. I publish on Entertainment, Sports, Politics, Lifestyle, and Technology. You can also follow Us on : YouTube Channel - My Ghana Media TV, Facebook - MyghanaMedia TV , Twitter - @MyGhanamedia2 & Instagram - My Ghana Media TV. Email Address: [email protected] Contact Us: 0200818719
@@MyGhanamedia2
Previous IGP Replies GSS, CHRAJ: ‘Your Research May Have Been Affected By Historically Pervasive Stereotyping’
Next Eastern Region: One Person Shot Dead As Two Communities Clash At Ofoase Ayirebi