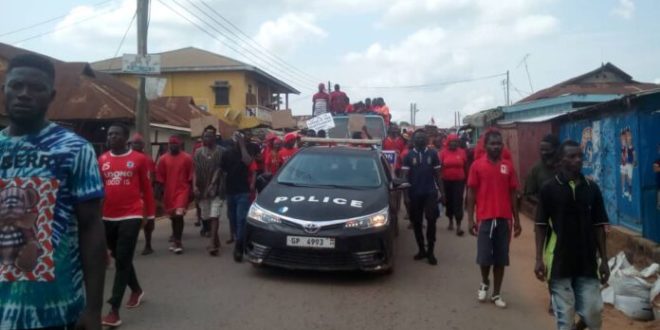 There is tension mounting in the Yilo and Lower Manya Krobo Municipalities in the Eastern Region due to the unavailability of electricity since Wednesday, July 27, 2022.

The Electricity Company of Ghana, ECG has reportedly switched off feeders at the Bulk Supply Point supplying power to municipalities following the tempering of their transformers by some unscrupulous residents.

ECG has been installing prepaid meters since June 14, 2022, in the Krobo enclave with the help of about 50 armed military personnel.

However, residents including some chiefs have been resisting the exercise with a Series of demonstrations and protests.

The affected communities and residents have allegedly tempered with the ECG transformers to reconnect power to their homes hence the decision by ECG to switch off the main feeders.

“Both the Yilo and Lower Manya Krobo have been experiencing total blackout on Thursday till now. ECG has switched off power to the entire area”

“Meters are owned by individuals, not groups so if you come to one community or one area and they disappoint you why do you switch off the entire area? We have been in darkness since Wednesday. The thing started last week. They were switching off power tot by tot. They disconnected some areas. Later they came to restore their transformers and the community and said while others have been restored and others not restored so they also took the law into their hands and some of the transformers were restored without ECG,” Assembly Member for Nuaso in Odumase, Samuel Torgbor told Starr News.

The power cut to the two municipalities is already having dire consequences on economic and social activities.

Many institutions such as health facilities, the Municipal Assemblies and a few other shops including cold stores have resorted to using generators.

Yilo Krobo municipal assembly, for instance, is preparing for DPAT Assessment but the power cut has affected the exercise forcing management to work with the generator throughout last night.

On December 6, 2021, ECG took a similar decision and explained in a statement issued by the Tema Regional office of the company that, “in view of the on-going interference in our network as a result of the scaling down of our operations in the Krobo area which was necessitated by the threat to our staff, ECG has decided to shut down the feeders at the Bulk Supply Point (BSP) directly feeding the Communities in order to protect our network, lives, and properties of innocent customers and the general public within the lower Manya and Yilo Krobo communities ”

The switching off of the feeders was done a few hours after the power distributor closed down its district office in Somanya over safety concerns and relocated to a new office at Juapong to serve Yilo Krobo, Lower Manya, Asuogyaman, Okere, Ho West, North Tongue, and Shai Osudoku.

The impasse between Krobo residents and ECG was caused by the refusal of customers in the area to pay years of arrears over alleged overbilling.

This triggered revolt which led to an attack on the ECG office and clashes by armed Police leading to casualties in 2019.

However, ECG has ring-fenced all arrears of customers in the Krobo area from the period between 2014 and 2017. But arrears between 2018 to date must be paid by customers within 5 years however, the debt will not be transferred into the prepaid meters to be installed.

“Normally the practice is that when you put prepayment meter there you put the debt on the post paid meter on the prepaid meter so that we will recover whatever debt, but in this case, we said from 2018 to date we are not going to put it there, and that we will meet customers individually and determine how they should pay the debt” Abraham Abebreseh, Director of Customer Service, ECG said.

I'm Adwenpa-Hene |Blogger & Broadcaster Journalist. I am the CEO and manager of this noble website. I publish on Entertainment, Sports, Politics, Lifestyle, and Technology. You can also follow Us on : YouTube Channel - My Ghana Media TV, Facebook - MyghanaMedia TV , Twitter - @MyGhanamedia2 & Instagram - My Ghana Media TV. Email Address: [email protected] Contact Us: 0200818719
@@MyGhanamedia2
Previous Anyinasin School Shut Down After Gang Forced Teacher To Kneel And Beg For Punishing Students
Next NABCO Trainees To Picket Jubilee House Over Unpaid Allowances And Impending End Of Programme