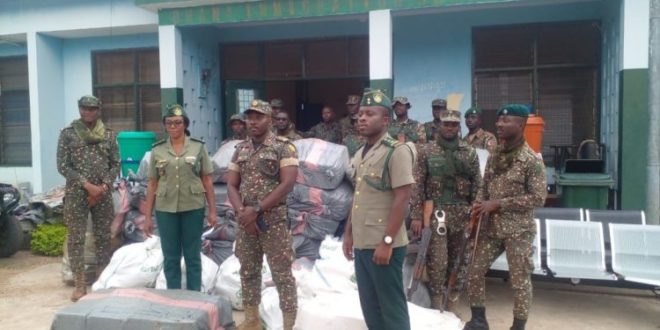 Officers at the Nyive Sector Command of the Ghana Immigration Service (GIS) in the Volta Region have intercepted 2,497 slabs of substances suspected to be Indian hemp.

The substances which were intercepted at Atikpui, a border community along Ghana’s boundary with Togo in the Ho municipality, were hidden in industrial sacks.

The Public Relations Officer of the Volta Regional Command of the GIS, Inspector Felix Klu Adjei who confirmed the incident said the operation happened on Tuesday, July 26, 2022 at about 8 am.

He added that after the necessary processes were completed the exhibits were handed over to the Narcotic Control Board on Thursday, July 28, 2022.

The Deputy Superintendent of Immigration (DSI), Joanna S.A Agbeti, Commander for Shia Border Post narrated that the suspects were conveying the suspected Indian hemp from Ghana to Togo using an urvan bus.

Sector Commander for Nyive, Assistant Commissioner of Immigration (ACI) Abdulai Zakaria added that due to the nature of the unapproved route being used, the vehicle of the suspects got stuck at some point.

To this end, they decided to offload the vehicle to allow it to cross.

That is how their informant discovered the sacks and notified them. The command quickly deployed a team to ascertain the information. The suspected owners of the goods upon realizing that they have been found out abandoned the consignments and fled.

It is not clear if the team escaped with some of the substance or left it all behind.

ACI Zakaria thanked the informants and urged residents in the region, especially those living along Ghana’s boundary with Togo to cooperate and collaborate with security agencies in the fight against illicit activities especially, .

In 2021, the Ghana Immigration Service in the Volta region intercepted over 3,000 parcels of illegal drugs. Some 760 illegal immigrants were also arrested and repatriated to their various countries between 2021 and first quarter of 2022.