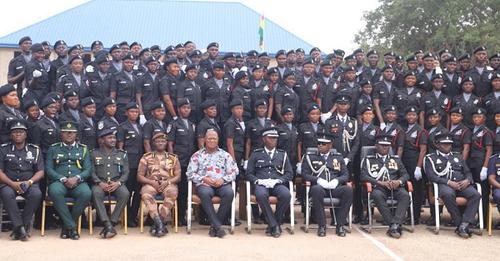 Three thousand two hundred and twenty-four police recruits have passed out from five police training schools in the country. They are made up of 1,953 males and 1,020 females who constitute the first batch of recruits for 2022 who have successfully completed the Basic Police Training programme.

The graduation ceremonies were held simultaneously in the national capital – Accra, Koforidua, the Eastern Regional capital; Ho in the Volta Region, Kumasi in the Ashanti Region and Pwalugu in the Upper East. In all, 847, 416, 361, 612 and 725 of the recruits were trained in the regions in that order.

Also, deserving recruits were honoured for their sterling performances in the fields they were adjudged in.

Mary Anane-Amponsah reports from the National Police Training School at Tesano, Accra that the 847 recruits who were the largest intake, displayed parade formations such as Nkabom, (Unity) Dwennimmen and Nteasee (Understanding) to the admiration of all present.

The Director-General of the Criminal Investigation Department (CID), Commissioner of Police (COP) Isaac Ken Yeboah, who was the reviewing officer for the parade, said the service under the new administration had positioned itself to ensure that personnel exhibited international best practices in consonance with the vision of the service.

He said that would enhance the way the police controlled crowd and maintained law and order in the country.

“This is the first batch of recruit intake since the government gave clearance for recruitment of 5,000 men and women into the service,” COP Yeboah said, adding that the second and third batches were still in training.

See also  WAPCO To Shut Down Takoradi Facility From January 12

“At the senior offi cer level, the Police Academy, for the first time in history is running Cadet Officers Courses for 308 personnel at a session, which is the biggest number witnessed at the academy,” the Director-General of CID indicated.

Intakes at the training schools in Koforidua and Ho were all males. From Koforidua, Pacome Emmanuel Damalie reports that an all-male 416 new recruits at the Koforidua Police Training School passed out as General Constables and General Sergeants.

The number also included 50 under cadets (graduates) who passed out as General Sergeants at the event held at the Jubilee Park to officially admit the new police offi cers into the Ghana Police Service. Addressing the parade, the Director-General of Police Administration, COP Christian Tetteh Yohuno, who was the reviewing offi cer, charged the new recruits to serve as good examples in order not to drag the reputation of the service into disrepute.

He said the Police Administration had taken a stance to weed out miscreants and criminals that were parading themselves as police offi cers, thus, contributing to the destruction of the hard- earned reputation of the police service.

COP Yohuno said emerging crimes, terrorism, cyber-related crimes and changes in modus operandi of criminals were some of the issues that impinged on the police every day.

That translated into increased demand on police personnel to deliver services that were more diverse, complex, skilled and specialised in order to deal with current crime trends.

“It is to equip police personnel with the requisite knowledge and the skill sets needed to effectively deal with these challenges of modern policing that the IGP, Dr George Akuffo Dampare, introduced a paradigm shift in recruit training modules and a changing focus in policing in the country as a whole,” he said.

That the IGP did by standardising recruit training modules and curriculum, restructuring of recruit training activities with expanded improved facilities, the Director-General of Police Administration said.

COP Yohonu indicated that equal emphasis was now placed on field training with practical attachment to gain field experience under close supervision of cadet offi cers. “Hitherto, the emphasis was mainly on enhancement of recruits knowledge on the laws they are expected to enforce when they pass out,” he explained.

From Kumasi, Kwadwo Baffoe Donkor reports that the reviewing officer, COP Kofi Boakye advised the personnel to be of good behaviour and not to engage in acts that would bring the name of the police into disrepute. He said the police service was a reputable organisation and as such they should work to project the name of the service.

From Ho, Alberto Mario Noretti, reports that the parade took a unique form with display of public order management and dispatch riding skills in addition to the usual parade drills.

The reviewing offi cer, COP Mr Alphonse Adu Amankwaah, who is also the Director-General in charge of Private Security Operations, said the demands on the police from the changing crime modes, required specialised skills in dealing with crime in contemporary society.

He said global terrorism had become an issue for every country, thus the police service had held counter-terrorism training for all recruits to help prevent any attacks as experienced by our neighbouring countries.

COP Adu-Amankwaah congratulated the recruits and cautioned them that the Police Administration would not countenance any act of bribery, extortion, corruption and violence on the part of its personnel.

Four female police recruits swept four of the six awards awarded to recruits who passed out at the Police Safety Training School (PSTS) at Pwalugu in the Talensi District, reports Gilbert Mawuli Agbey.

Addressing the parade, the Review Offi cer, Commissioner of Police (COP), Francis Ebenezer Doku, who is also the Director-General, National Protection Directorate, told the recruits that the Police Administration was taking steps to weed out miscreants and criminals masquerading in police uniforms from the service to restore the service’s reputation and good image.

In Accra, General Recruit, Samuel Asamoah Amponsah, emerged the Overall Best at the NPTS and was honoured with a baton in recognition of his performance, among other presents.

Sergeant Florence Aba Eshun was recognised as the Best Graduate Recruit Policewoman for the training school.

He was the overall nine best under cadets nationwide. The Ashanti Region also produced the overall fourth national best recruit in the person of General Recruit Daniel Oduro Anim, who emerged as the Overall Best Recruit from the Kumasi Police Training School.

The Baton-of-Honour for the Best Passing Out Graduate in Ho went to General Sergeant Daniel Ocran Agyeman, while the award for the Best General Recruit went to Francis Adjanor.