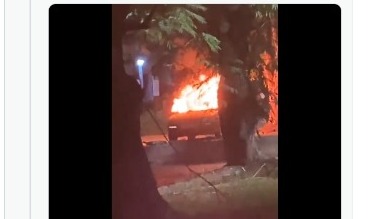 A vehicle parked at the Mensah Sarbah Hall car park was set ablaze as a result of the clash between the Vandals and Vikings last night.

Residents of Commonwealth Hall of the University are otherwise known as Vandals and Sarbah Hall residents are also called Vikings.

Somehow, one of them strayed to the Commonwealth Hall, he was beaten up and his phone taken away.

“Besides burning the car, they came to fight, destroyed a lot of things and took away one of statues at the Sarbah Hall,” our source said.

UG: A vehicle at the Mensah Sarbah Hall car park has been set ablaze as a result of the clash between the Vandals and Vikings this evening.

Reports say, it took the timely intervention of the Police to quell the riot.