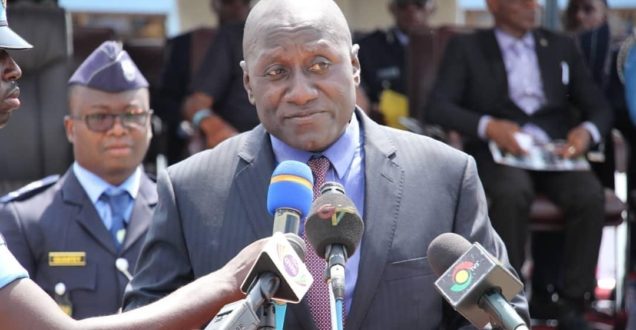 The Commissioner of the Customs Division of the Ghana Revenue Authority (GRA), Colonel Kwadwo Damoah (Rtd.) has taken swipe at the report by the Office of the Special Prosecutor implicating his office in corruption-related acts involving Labianca Company Limited.

Describing the report as ‘hollow’ and one that does not contain any substance while speaking at a Customs Division Management Retreat in Kumasi in the Ashanti Region, the Commissioner of the Customs explained that, the basis for the OSP’s investigative report was because he did not allow one Mr. Akrugu to be seconded to the SP’s office.

He stated that any attempts by the Special Prosecutor to bring him down will not work because the Almighty God is on his side.

“Three days ago a report purported to be coming from the Office of the Special Prosecutor trying to indict the Deputy Commissioner of Operations and myself [but] anybody who has read that report very well will know the basis of that,” he said while addressing some Senior Customs officers at the retreat.

“And luckily for Me, God is always on my side, before that report came, that person had made a comment to some people who had come to tell me [that] he [Special Prosecutor] was going to publish (a report) that will discredit me…

“I even sent people to go and tell him that he is a small boy and I am older than him, I have lived a meaningful life and if he attempts to destroy me, it won’t be easy for him. People have tried and I have survived and this one too I will survive it.”

In explaining the underlying friction between him and the Special Prosecutor, Kissi Agyabeng, Col. Damoah said:

“All that happened because he [Special Prosecutor] wanted Mr Akrugu to be seconded to his office and I said ‘no’, Mr Akrugu is a customs officer, primarily employed to do customs work. And he is to partner Mr. Akoto Fakyin in that office, Africa Continental Free Trade Area.

“He [Akrugu] deals with tariffs and valuation and therefore, I cannot second him to the office of the Special Prosecutor because he has a primary role to play in customs. And then he comes back through the Commissioner General and again I said ‘I insist and we will go by that and he has a primary role; it is when I don’t have a role for him or I can dispense with his services, (if) I have others to do what he is doing to do that I will give him to you.’

“So, I insist and he calls me to his office in relation to Labianca and at the end of it, he talks to me about this same matter and I said, yes, it is not the Commissioner General, I wrote it (the denial letter) go and check it and I have my reasons, he will not be released to you; he will be in customs. And then he goes to resign, he is given the position of Commissioner of Police rank and he is now in his office; and he goes to make allegations that Mr Adukye and myself, we hate him and they will deal with us and that is it – that is the basis of that publication.”

Colonel Damoah continued: “If you read it very well, there is nothing in it. It is hollow and it is actuated by malice and those who are behind, they know themselves. They’ve tried it several times it is not working and they want [to destroy me]; it won’t work. I am ready for any prosecution, that is what you must be doing, not to say, if you do further investigations up to 2017. Up to 2015, I had debtors written by Deputy Commissioner, Sandra Agorhu granting similar things and I produced them when he called me…this is common practice in customs.

“If you want to remove me, I have no problem, I won’t be Commissioner of Customs forever; I am ready to go but don’t disgrace me, don’t hide behind people for your own failures and incompetency and deal with me.

“…this is serious business, when you have a whole Commissioner and a deputy Commissioner being disgraced this way and you have the support of people who think they can only achieve things not by merit but by destroying others, God is watching all of us; you hold the Bible, you hold the cross, God is watching you. And I have always been saying this; accountability awaits all of us; we have accountability on this earth and after death.

“If you are behind it and you think you want to destroy Kwadwo Damoah, no. I want the best for Customs Division, I want Custom Officers to be happy to do their job; it is only when they are happy that we will be able to achieve the target…”

A deputy Commissioner of Customs in charge of Operations, Joseph Adu Kyei, was cited for issuing unlawful customs advance ruling according to the Special Prosecutor’s report.

This led to the reduction of the values of intended imports between a range of 5 per cent and 10 per cent below the benchmark values.

The ruling was said to have been approved by Col. Damoah and did not appear to have been brought to the notice of the Commissioner-General, according to the report.

The report also noted that Col. Damoah “acknowledged the disingenuity of the outcome by admitting that the applicants did not meet the legal requirements for the issuance of customs advance ruling.”

Though Col. Damoah distanced himself from the wrongdoing, the Special Prosecutor found that he gave his “tacit approval”.

“Indeed, Mr. Adu Kyei’s decision would not have passed muster but for Colonel (Rtd.) Damoah’s apparent approval. The halfhearted seeming recantation is unhappily belated and does not absolve Colonel (Rtd.) Damoah of ultimate responsibility for the apparently contrived decision,” the report indicated.