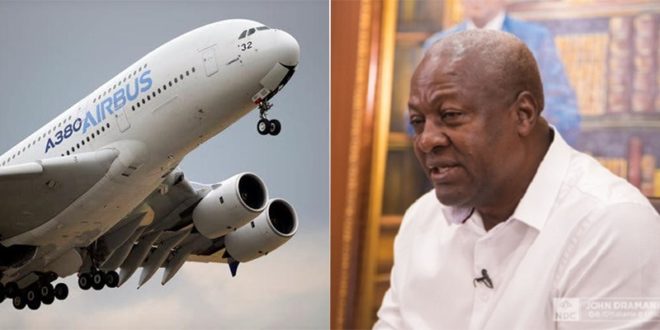 The Special Prosecutor  Kissi Agyebeng says his outfit has listed the Airbus SE scandal as one of the over 70 cases it is investigating.

Investigation into the alleged €4 million bribery case by Airbus SE, a European multinational aerospace corporation, in respect of the sale and purchase of military aircrafts for the country, popped up in a latest report by the Office of the Special Prosecutor (OSP).

A report titled, “Half Yearly” issued on Monday stated that “The Office is engaged with INTERPOL and the central authorities of the United Kingdom and the United States under the mutual legal assistance regime.”

In July 2020, the OSP, then headed by Martin Amidu, ‘unveiled’ former President Mahama as the Government Official 1 or Individual 1 that both the United Kingdom and United States investigators referred to in the Airbus SE scandal.

The OSP has been pursuing the former President’s brother, Samuel Adam Foster, aka Samuel Adam Mahama, described as Intermediary 5 in the investigations, and three other foreigners, who have been mentioned as individuals who collected or were paid around 4 million Euros in bribes on behalf of Ghanaian top officials for the supply of aircraft to the Ghana Armed Forces during Mr. Mahama’s tenure as Vice President and later President.

Mr. Amidu had said in a statement that he had written to the Ministry of Foreign Affairs to give Adam Mahama the chance to voluntarily join an emergency flight for Ghanaians stranded in the United Kingdom to return to Ghana on Monday, July 27, 2020 to face prosecution over the alleged Airbus bribery case.

Mr. Amidu then said in the statement that he was being attacked by persons close to Mr. Mahama for allegedly tainting the former President’s image when in fact, he said, he wanted to pursue the case devoid of politicisation.

“This Office has today written letter with reference number OSP/SCR/2D/34/20 dated 24th July, 2020 to the Ministry of Foreign Affairs and Regional Integration to offer Samuel Adam Foster, also known as Samuel Adam Mahama, the opportunity to accept to voluntarily evacuate on the evacuation flight for Ghanaian citizens stranded in the United Kingdom to return to Ghana through a scheduled flight on 27th July, 2020 (sic).”

According to Mr. Amidu, “This Office’s letter states, amongst other reasons for the letter to the said Ministry, that Samuel Adam Mahama’s elder brother of the full blood who without doubt and the evidence available to this Office answers to the description of the elected Government Official I, allegedly granted a denial interview to the Daily Graphic which published same on 20th June, 2020 fortunately containing suspected admissions that he is the elected Government Official I referred to in the UK judgment.”

He said that “serving appointees of this Government have been unable to obtain the voice recording of the interview to enable this Office to confront the former President with his own admissions in the interview as answering to the description of the brother of Samuel Mahama as the Intermediary 5 (sic).”

Meanwhile, the SP said in his latest report that the banking and financial sector crisis is also on the table for investigations.

According to Mr. Agyebeng, the investigation targets alleged corruption and corruption-related offences perpetrated by some officials of the Bank of Ghana, banks, specialised deposit-taking institutions, and financial holding companies.

The report said the Office is also investigating 70 other cases at various levels of consideration.

“These would be publicised if the Special Prosecutor determines that they are within the mandate of the Office and that they should be moved past the preliminary investigation stage,” the report noted.

Mr. Agyebeng explained that this was a policy intended to protect the privacy of individuals and the business operations of institutions and companies, and to avoid unnecessary stigmatisation.