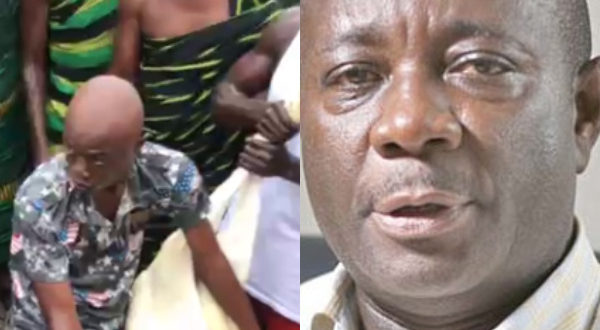 Odike Breaks Silence On His Banishment From Manhyia

The founder and leader of the United Progressive Party, Akwasi Addai alias ‘Odike’, says his banishment by the Kumasi Traditional Council contradicts the principles of democracy.

On Friday, a number of Kumasi chiefs led by the Bantamahene, Baffour Owusu Amankwatia VI, performed rituals to banish Odike on the back of comments he made accusing Ashanti chiefs of condoning illegal mining (galamsey).

But speaking to Kwame Nkrumah Tikese on Okay FM’s Ado Akye Abia on Monday, Odike said the action by the chiefs contradict the principles of democracy as he was denied a fair hearing.

“I have not even been charged with any wrongdoing. Neither was I called to answer to any offence. They just called the chiefs as soon as they received the tape of my statement and slaughtered a ram to banish me from Manhyia. What is then the essence of the democracy we are practising? If you have heard something you are not happy with, you should at least call me to explain myself. They rather went ahead to banish me and have also called the chief of my hometown to also banish me. The chief came from Italy to ascend the stool, is that how people are banished in Italy where he came from?” Odike questioned.

Odike explained his statement which caused the banishment noting the devastating impact of illegal mining on river bodies in Ashanti.

“Some time ago, Abu Jinapor, who is the Minister for Lands and Natural Resources, held a programme which Otumfuo attended, and a lot of the chiefs in Ashanti attended. It was a programme held to look at ways to end galamsey (illegal) mining.

“At that programme, Otumfuo said he is very aware that a lot of his chiefs are implicated in the galamsey. From then, I thought things would get better because Otumfuo had named and shamed them. But it has kept escalating. River Offin now looks discoloured, and if you come to the Ashanti Region, all our water bodies are being destroyed. What hurts me more is the situation at Bosome Freho. The source of water for the residents has recently been taken over by a supposed staff at the Jubilee House who brought soldiers to start his galamsey business. The residents resisted, and a young man had his eyes pierced with scissors,” Odike said.

According to him, the statement he made which caused his banishment was only aimed at calling Manhyia to sit up amidst the growing devastating effects of galamsey in Ashanti.

“I went to Oyerepa and said if the Otumfuo and his chiefs are aware of the galamsey activities and are sitting aloof, then they don’t have the interest of us their subjects at heart. Because we are all supposed to be fighting galamsey together, and if you come public to implicate your chiefs, then it means it is deliberate. So I entreated Manhyia to sit up because this was not how their predecessors like Osei Agyemang Prempeh watched on for such activities to fester,” he said.

Odike further shared his disappointment in Ashanti chiefs over what he said was the arbitrary sale of lands without recourse to the collective interest of Ashanti and its development.

According to the Kumasi Traditional Council, the businessman turned politician made inciteful statements that the Council deemed to be distasteful and unsubstantiated and meant to dent the image of Manhyia.

The chiefs on Thursday slaughtered a ram as part of the rituals to banish him.