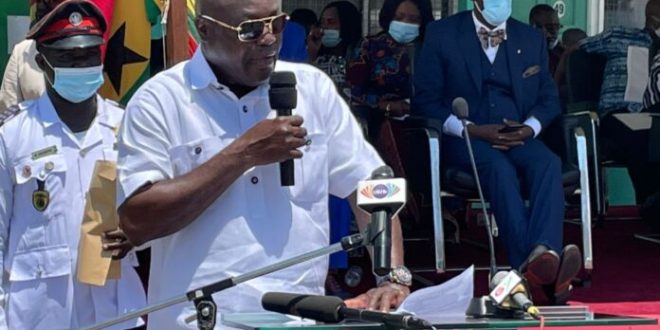 This was contained in a letter signed by the Local Government Minister, Daniel Botwe.

According to the letter, his reinstatement followed a recommendation by the Western Regional Coordinating Council.

“I wish to inform you that H.E the President of the Republic, in response to recommendations by the Western Regional Coordinating Council has given approval for the reinstatement of Mr Abdul Mumin Issah as the Metropolitan Chief Executive for the Sekondi Takoradi Metropolitan Assembly,” portion of the letter said.

See also  Majority Leader To NPP Challenger: If It’s For You, I Will Contest Again To Show You Where You Belong

Reacting to the issue on Atinka FM’s AM Drive with host Kaakyire Ofori Ayim, Issaka Amon Kotei, revealed that the 6-month suspension was enough to deter others from engaging in the same act.

Issaka Amon Kotei also revealed that unconfirmed reports from Sekondi-Takoradi indicate that the Police officer in question has been transferred.

He added that although he cannot confirm the development, he will be disappointed if the information turns out to be true.

President Akufo-Addo ordered Mr Mumin Issah to step aside for investigations to proceed after he allegedly assaulted a Police officer verbally.

The alleged verbal assault occurred after he was arrested for flouting road traffic regulations on Thursday, February 3.

In a video that went viral, the MCE, Abdul Mumin Issah was heard threatening the Police officer with a transfer, among other things.

In the video, Abdul Mumin Issah also described the officer as “ugly” and said he would have beaten him to death when the officer challenged him for driving on the shoulders of the road to move past a Police checkpoint.

Mr Abdul Mumin Issah was charged with three counts of Assault of a public officer, offensive conduct conducive to breaches of the peace and disturbing the peace in a public place contrary to Sections 205, 207 and 298, respectively, of the Criminal and Other Offences Act of 1960, Act 29.

He was however granted a ¢100,000 self-recognisance bail with three sureties.

I'm Adwenpa-Hene |Blogger & Broadcaster Journalist. I am the CEO and manager of this noble website. I publish on Entertainment, Sports, Politics, Lifestyle, and Technology. You can also follow Us on : YouTube Channel - My Ghana Media TV, Facebook - MyghanaMedia TV , Twitter - @MyGhanamedia2 & Instagram - My Ghana Media TV. Email Address: [email protected] Contact Us: 0200818719
@@MyGhanamedia2
Previous E-procurement Is The Main Solution To Corruption- PPA CEO
Next Akufo-Addo Congratulates Bagbin For His Election As CPA President