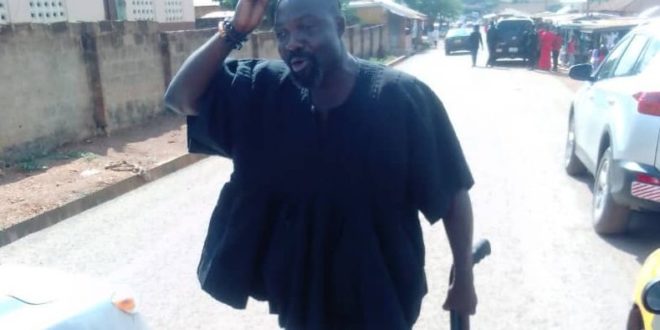 Residents of Akyem Kade in the Eastern Region are yet to come into terms with a shooting incident that occurred at a funeral over the weekend.

An eyewitness narrated: “When we got there, we saw a man holding a gun at the area where the chiefs chair had been arranged. He had folded all the chairs down. The Chief ordered we arranged the chairs well. The suspect dared to shoot the Chief if we touch the chairs. The chief dared him as well. The police had to quickly intervene. Some guys held him as he shot in the air. Later on the police came to arrest him.”

The 42-year-old suspect has been arrested by the Akyem Kade police for holding a pump action gun and threatening mourners at a funeral.

The suspect, identified as Osei Kojo Forson was at the funeral grounds in Akyem Kade and gave several warning shots, threatening to kill the Kade chief, Osabarima Agyare Tenadu II .

Mourners and well wishers fled for fear of their lives.

Protracted chieftaincy disputes continue to stretch security and peace efforts in the Region.

The Akyem Kade Police Commander Superintendent Agyenim Boateng explained the suspect has been granted police bail and will appear before court on Tuesday, September 13.

“The weekend incident had resulted in people living in with fear,especially when the suspect has been granted bail.”

He appealed to the Inspector General of Police (IGP), Dr. George Akuffo Dampare, to get his men treat the matter with all the security intelligence and seriousness it deserves.