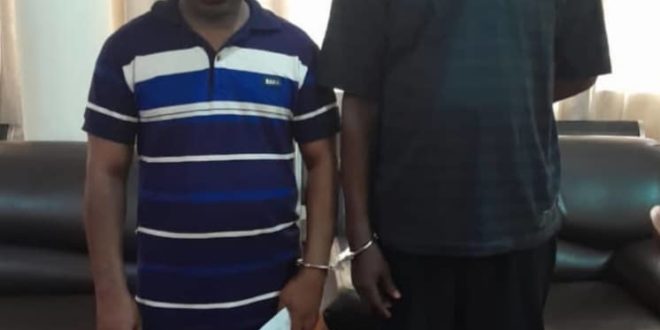 The two suspects in the Mankessim murder case have been remanded in police custody.

The two people, the Tufohen of Ekumfi Akwakrom, Nana Oye and a self-styled pastor have been arrested by the police in connection with the death and secret burial of a lady at Mankessim in the Central Region.

Details of how the victim – Georgina Asor-Botchwey – died is not out yet neither is it clear the circumstances under which she was killed.

The police however arraigned the two at the Cape Coast Magistrate Court on Thursday morning for the court to remand them so as to enable them conduct further investigation into the case.

The plea of the suspects were not taken.

According to police statement released on 22nd September, 2022, the two have confessed to murdering the victim fro money rituals

News Release:
TWO ARRESTED IN CONNECTION WITH THE MURDER OF A 25-YEAR- OLD WOMAN AT MANKESSSIM. pic.twitter.com/snDH2rxiDh

Identified as Georgina Asor-Botchwey, she was said to have gone missing last week.

This was after she travelled from Yeji in the Bono East Region to Cape Coast with the intention of attending an admission interview at a nursing school in Cape Coast.

It was the pastor, who reportedly after his arrest in connection with the case, led police to the spot where she was buried.

The body of the lady in her mid twenties was exhumed Tuesday (September 20, 2022) in an uncompleted building at Esikafoambatem at Edumadze, a suburb of Mankessim.

Preliminary information gathered indicates that the pastor had sent the deceased who was in Mankessim for a visit to a drinking spot owned by Nana Oye also known as Nana Crack to buy her a drink.

After the drink, Georgina was taken to one of the rooms near the pub also owned by Nana Oye to rest there since she looked tipsy.

The pastor is said to have confessed to the police after which he led the police to the place where the body was buried.

The body was exhumed from the chief’s house where her bag, shoes, and other belongings were also found.

I'm Adwenpa-Hene |Blogger & Broadcaster Journalist. I am the CEO and manager of this noble website. I publish on Entertainment, Sports, Politics, Lifestyle, and Technology. You can also follow Us on : YouTube Channel - My Ghana Media TV, Facebook - MyghanaMedia TV , Twitter - @MyGhanamedia2 & Instagram - My Ghana Media TV. Email Address: [email protected] Contact Us: 0200818719
@@MyGhanamedia2
Previous Resign! – CPP To President Akufo-Addo
Next ‘You Can’t Memorise Your Way Out Of Poverty’ – The UN Speech That Got Education Minister Trending