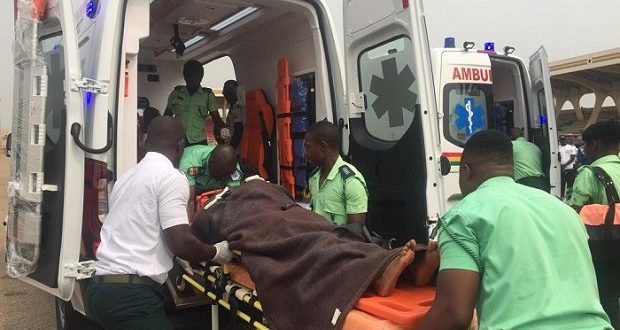 The National Ambulance Service (NAS) has refuted claims that one or its vehicles that attended to accident victims on the Mankessim – Cape Coast highway on September 14 was in shortage of fuel.

The service says a video going viral on social media captured their vehicle and personnel with accident victims whilst by-standers were soliciting for funds to fuel support.

But in a statement signed by the deputy director of Public Relations, Simmons Yussif Kewura, it says the EMTs as captured in the viral video were stabilising the victims before taking them to the hospital.

However, investigations are being conducted to ascertain what caused the scene.

Read below the full statement from the Service.

The attention of the Manage:minor the National AnthulancecSer;ice (NAS) has been drawn to a video circulating on social media concerning some Emergency Technical Technicians (EMT) attending to accident victims at a spot along the Cape Coast Mankessim Highway whilst a young man was captured in the video soliciting for funds allegedly for fuel to support the ambulance crew.

Based on the content of the video. we wish to state the facts as follows:

The ambulance vehicle with the registration number GV 640-20 which was captured in the video circulating on social media belongs to the National Ambulance Service.

The said ambulance stationed at Ekumfi had enough fuel before it was dispatched to the accident scene on the 14th of September 2022.

It is a routine practice that when a crew of Ambulance personnel arrive at an accident scene, they first stabilize the victims before taking them to the hospital.

It was in this process of stabilizing the patients that some by-standers captured the scene, did a video commentary, and posted the video on the social media.

It can be seen in the video as captured that, the EMTs were busily attending to the victims to stabilize them before moving to the hospital and not bccause the Ambulance had run out of fuel.

The Management of NAS has not sanctioned any collection of money by by-standets.

This notwithstanding, invegigations have commenced to unearth the circumstances under which the by-standers were collecting money for fuel support for the accident victims.