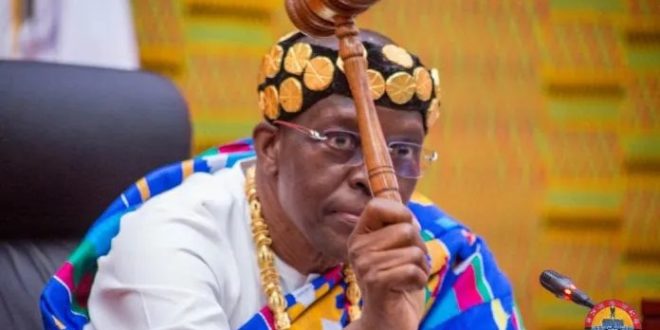 Mr Bagbin said the conduct of the renowned lawyers association is problematic and people are worried about its position on matters of national interest.

The Speaker of Parliament made this revelation when a delegation from a newly created association of lawyers: the Law Society of Ghana (LSG) paid a courtesy call to him at his office.

The LSG delegation which was led by its Acting President and Member of parliament for South Dayi, Hon. Rockson-Nelson Dafeamekpor, was at the Speaker’s office to congratulate him on his new position as the President of the Commonwealth Leaders Association.

They used the opportunity to inform the Speaker about the inception of LSG and its contribution to nation building.

The LSG is an association for lawyers and law students who seek to shape national discourse and fight against injustice in all forms.

To Mr Dafeamekpor, the group has realized that the GBA has deviated from its core mandate in terms of fairness and inclusiveness.

He also observed that the GBA has sidelined some of its members and added that a lot of things done by the association are discharged with partisan colours.

The primary aim of LSG, Dafeamekpor stressed, is to cater for “the welfare of lawyers” and “push for reforms in the Ghana Legal system, for instance the Judicial System control on the training of legal professionals.”

Reacting to the vision of the LSG, Speaker Bagbin stated the Society is good for the country as it is going to throw a global light on Ghana especially with the global affiliations.

To him, a lot of people were worried at the state of GBA and their actions.

” I am no longer a member of GBA,” he disclosed and explained that he did not seem to benefit from the association.

Speaker Bagbin said the GBA has now become an association of elites, stressing that he used to pay his dues “religiously” but got to know that any lawyer that attended the public tribunal was not recognized and thus his interest in GBA diminished.

“I will support the LSG wholeheartedly and with the right opportunities irrespective of the numbers of members so long as we are focused and committed, we can make tremendous waves,” he assured.

Speaker Bagbin said Ghanaians the brain power to capitalize on “for our benefit” hence “the quest for value and what is right always takes us to places and I believe LSG will be one of the pillars of such a culture to take us to places as a country.”

He also advised LSG to come up with reasoned opinions and critique law reports and publish them in journals.